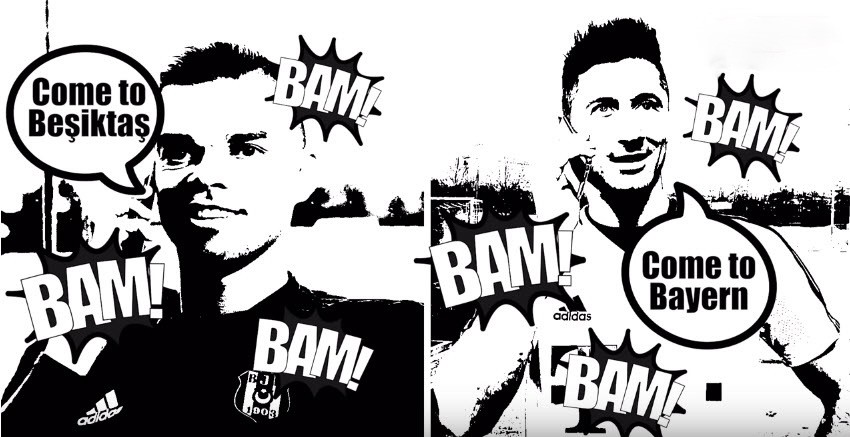 Beşiktaş players Pepe and Alvaro Negredo invited Bayern Munich striker Robert Lewandowski to "come to Beşiktaş" in yet another comical video ahead of the UEFA Champions League round of 16 tie between their teams.

In the short video, Pepe shows his teammate Bayern's post-draw tweet with a video that included a photo of Lewandowski saying "We're coming to Beşiktaş," to which Negredo responded: "Let's call them."

As Beşiktaş players called, Lewandowski appeared to be on the receiving end.

"Hi, this is Pepe. We're waiting [for] you in [the] Vodafone Park. Come to Beşiktaş," the Portuguese defender said before a comical Eurodance beat started playing in the background.

"Yes, of course. We're coming to Beşiktaş. But first, you have to come to the Allianz Arena," Lewandowski responded.

Set up by Dugout, a media company jointly owned by dozens of the world's most popular football teams, the players took part in a new video referring to the summer transfer window trend started by the Istanbul club.

Beşiktaş and Bayern have enjoyed a friendly relationship on Twitter in recent months with the German team joking about "coming to Beşiktaş" on numerous occasions.

The two teams will face each other in Munich on Tuesday in the first leg of Champions League round of 16 before the return game in Istanbul on March 14.

The "come to Beşiktaş" trend was launched by overzealous Beşiktaş fans who bombarded football players' social media pages upon hearing rumors about their potential move to their favorite team. The trend was picked up by the club as it started announcing every player it signed with videos featuring a chain of phone calls in which each player convinces the next to "Come to Beşiktaş" with the same comical music.