PSG's Neymar to undergo surgery in Brazil this week 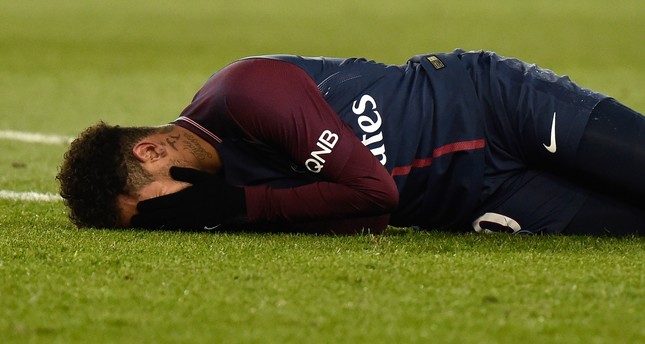 Paris St Germain forward Neymar will be operated on in Brazil at the end of this week after he suffered a fractured metatarsal and a sprained ankle on Sunday, the club said.

"After tests, and with the player's agreement, it has been decided that surgery is the best option," PSG said in a statement on Wednesday. "Neymar Jr will be operated on in Brazil at the end of the week."

The 26-year-old suffered a hairline fracture of the fifth metatarsal in his right foot as well as a twisted ankle late in PSG's 3-0 win over Marseille in Ligue 1 on Sunday.

PSG said Wednesday that Rodrigo Lasmar, the surgeon with the Brazilian national squad, will carry out the operation.

On Tuesday, the Brazilian's father had claimed the player would be out for "at least six weeks."

Speaking to ESPN in Brazil before PSG's announcement, Neymar Senior said: "PSG know that they will not be able to count on Neymar for the upcoming matches. His treatment will last six to eight weeks, whether there is an operation or not."

PSG coach Unai Emery had said earlier that "no decision" had been taken on whether Neymar would require surgery and that there remained a "small chance" of getting him back in time to face Real Madrid next Tuesday, March 6.

PSG lost 3-1 in the first leg in Spain two weeks ago and are in danger of being knocked out of the competition in the last 16 for the second season running.

Neymar appeared to be in tears as he was stretchered off the field at the Parc des Princes on Sunday.

Brazilian newspaper Globo Esporte claimed the former Barcelona player would be sidelined until May while, if his father's estimate was correct, Neymar would not return before the semi-final stage of the Champions League in late April.

However, Neymar should be fit to play for Brazil at the World Cup in Russia in June and July.

In the meantime, PSG had to do without Neymar for Wednesday's French Cup quarter-final at home to Marseille, the second meeting of the clubs in four days.

Argentine star Angel Di Maria replaced the Brazilian at the Parc des Princes, with PSG hoping to stay on course to win the French Cup for the fourth season in a row.

Neymar has scored 28 goals in 30 appearances in all competitions for PSG since his 222 million-euro ($264 million) move from Barcelona last August.

Meanwhile, in Brazil, Neymar's foot injury has unleashed sharp emotions and concern, rumors and speculation about the player upon whom so many hopes rest for World Cup victory.

Brazilians care little about the impact on PSG. Their attention is entirely trained on the World Cup, where they have ambitions of walking away with a sixth championship.

Images of Sunday's fateful duel between Neymar and Marseille player Bouna Sarr were being shown incessantly on TV, often in slo-mo, before he was stretchered off.

"I don't think we can really talk about fears of him not being at the World Cup. But there is a noticeable haste to find a solution so that Neymar will have recovered in time," an ESPN Brasil sports commentator, Mauro Cezar Pereira, told AFP.

Share on Facebook Share on Twitter
Previous in Football Paris Saint-Germain (PSG) forward Neymar said hello to Hüseyin Tayşi,... Next in Football "And with that final whistle, a great match comes to an end," said...
DAILY SABAH RECOMMENDS