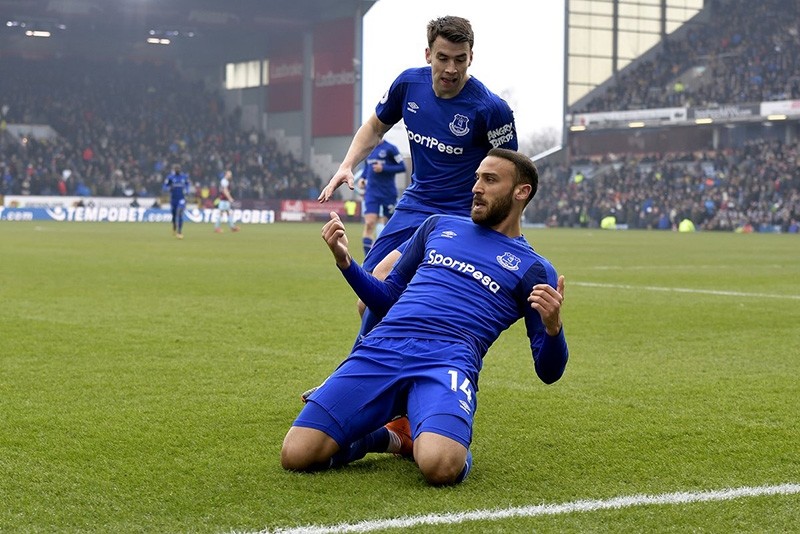 Turkish striker Cenk Tosun's header, his first in the Premier League, could not break Everton's away game spell against Burnley, but caused a sensation among Turkish football fans.

Burnley's 11-match winless run in the Premier League ended on Saturday when a late Chris Wood goal secured a 2-1 come-from-behind win over Everton, who finished with 10 men in an entertaining game at Turf Moor.

Substitute Wood headed in Johann Berg Gudmundsson's cross to grab the winner while Everton skipper Ashley Williams was sent off four minutes from time for a swipe at Ashley Barnes.

The visitors, with just one away win this season, had gone ahead in the 20th minute with Turkish striker Cenk Tosun's first goal for the club since he joined in January, a fine header after Seamus Coleman had flicked on a Theo Walcott cross.

Cenk Tosun signed with Everton in January from Beşiktaş for 27 million pounds ($37.2 million).

Tosun was substituted by Senegalese striker Oumar Niasse in the 68th minute.

Everton goalkeeper Jordan Pickford will have impressed watching England manager Gareth Southgate with a series of fine saves but Burnley finally beat him in the 56th minute.

Matthew Lowton's superb defence-splitting pass found Barnes who outpaced former Burnley defender Michael Keane and beat Pickford at the near post with a confident finish setting the stage for Wood to snatch the points with his late strike.