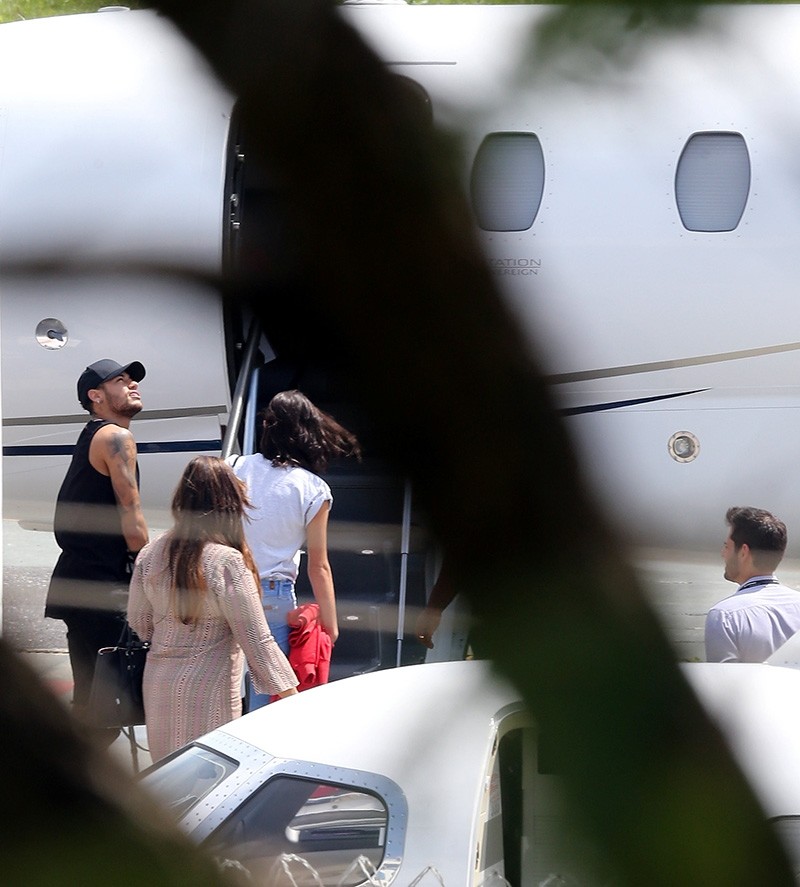 Surgery on the broken right foot of Brazil and Paris Saint-Germain superstar Neymar went successfully Saturday, officials said, leaving the planet's most expensive footballer in a race to recuperate before the World Cup.

Neymar left the hospital Sunday and flew to the airport in Belo Horizonte by helicopter, from where he was expected to head on a private jet to his luxury villa at the Mangaratiba beach resort around 100km from Rio de Janeiro.

According to Brazilian website Uol, Neymar's entourage has already prepared his recovery "headquarters" at his villa, which includes a gymnasium and a machine capable of producing 300kg of ice a day, similar to those used by modern football clubs.

Just after midday (1500 GMT), a spokesman from the Brazilian football federation announced that the operation was over.

"Neymar is already in his room. It went well," he said.

Neymar broke his fifth metatarsal -- the bone leading to his small toe -- during a 3-0 drubbing of Marseille on Feb. 25.

His recovery will be monitored by Brazil and PSG physiotherapist Rafael Martini, who has been working alongside Neymar since he started his career at Santos in Sao Paulo.

The striker -- whose transfer from Barcelona cost PSG a record 222 million euros ($264 million) last August -- has scored 28 goals in 30 appearances in all competitions for the club.

Neymar will miss PSG's make-or-break game against Real Madrid next Tuesday. But with Lasmar predicting a recovery period of two and a half to three months, Brazil is worried that Neymar, 26, may not be fit for the World Cup in Russia starting in June.

The rival demands from club and country appeared to erupt into tension just as he went under the knife, with Paris newspaper L'Equipe reporting Saturday that PSG believes Lasmar lied about Neymar's condition.

The report said that Neymar was initially found to have suffered a minor fracture and that PSG was shocked to hear Lasmar say Thursday that it was a serious break requiring a longer than expected recuperation.

Globoesporte.com reported that PSG also insisted it control any future information on the player's health.

Staff at the hospital in Belo Horizonte, were put on paparazzi lockdown, with a ban on using cellphones anywhere near the star.

After a remarkable turnaround in fortunes since the shambolic exit in a 7-1 semifinal loss to Germany in the 2014 World Cup, Brazil are seen as top contenders in Russia.

But a big part of that optimism depends on the talented Neymar, who missed that infamous semifinal four years ago and looks likely to miss two warm-up friendlies against Russia and Germany in March.

Jose Luiz Runco, a former chief medical officer for the Brazilian team, told AFP that Neymar will walk with crutches after two to three weeks, exercise while putting weight on his repaired foot after about 60 to 75 days, and then return to training.

"He's likely to recover pretty quickly because he's an athlete and young."

A potential plus for Neymar is that the enforced break from competitive football may do him good.

"When you think how exhausting the European season is, he could even arrive fresher than the others, both physically and emotionally," said Cristiano Nunes, the physiotherapist for Brazilian first division club Internacional in Porto Alegre.

Neymar may not be able to walk for a while, but he is already carrying the burden of a nation's expectations.

"I hope he recovers quickly in time for the Cup, so that he can play," said Mateus Falqueto, 13, who waited outside the hospital in the hope of getting Neymar's autograph on a yellow Brazilian team shirt that had already been signed by several other players.

Rita di Cassia Sepulveda stopped by with her seven-year-old twin sons, Gabriel and Rafael, who are avid fans of the star.

"I don't think fans like them exist anywhere else," she said. "It's remarkable. There's a sacred place at home where they keep anything that has something to do with Neymar. They watch all the games and when Neymar was injured they cried."

"Their dream is to meet Neymar. They know it's very hard but at least here they can feel close to him."

Neymar has suffered 14 injuries that forced him to miss at least one game, including the fractured vertebrae during the 2014 World Cup which forcied him to miss the infamous thrashing by Germany, but the latest is by far the most serious, GloboEsporte.com said.