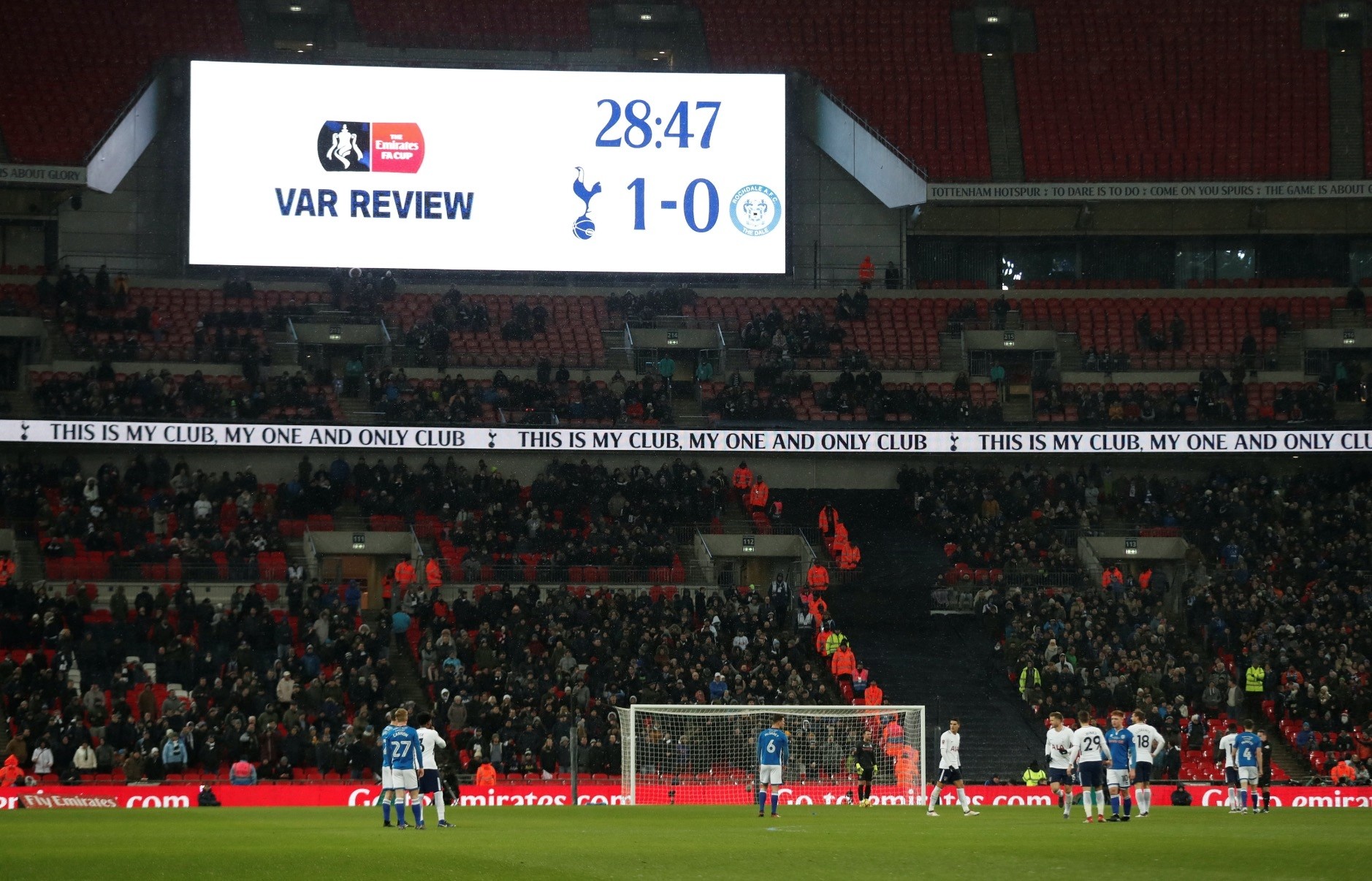 The big screen displays that a decision has been referred to VAR (Video Assistant Referee) during the FA Cup Fifth Round match between Tottenham Hotspur vs Rochdale at the Wembley Stadium, London.
by Associated Press Mar 05, 2018 12:00 am

In one of the most fundamental changes ever to soccer's 155-year-old rules, FIFA approved video review and cleared the way to use it at the World Cup in June

World football's panel overseeing the laws of the game voted to add video assistant referees (VAR) despite mixed results from trials in top-level games. The panel, known as IFAB, voted unanimously to begin updating the game's written rules to include VAR and let competition organizers ask to adopt it - with FIFA next in line this month. The decision "represents a new era for football with video assistance for referees helping to increase integrity and fairness in the game," IFAB said in a statement.

FIFA must take a further decision on using VAR at the World Cup in Russia, which kicks off June 14. That should be on March 16 when the FIFA Council chaired by President Gianni Infantino meets in Bogota, Colombia. Infantino has long said World Cup referees must get high-tech help to review key decisions at the 64-game tournament. Video review can overturn "clear and obvious errors" and "serious missed incidents" by match officials involving goals, penalty awards, red cards, and mistaken identity.

Still, Infantino also acknowledged on Saturday the VAR system "is not perfect." In 18 months of trials worldwide, reviews have been slower than promised and communication is often unclear in the stadium.

"VAR at the World Cup will certainly help to have a fairer World Cup," Infantino said at a news conference after the IFAB meeting. "If there is a big mistake, it will be corrected."

Infantino said FIFA must have "the ambition to get close to perfection" even if some coaches, players and fans were not yet convinced by video review.

VAR has often created confusion in the first full season of live trials which now include more than 1,000 games worldwide. Top-tier competitions which opted to use it include Germany's Bundesliga and Italy's Serie A. Several games at the 2017 Confederations Cup, FIFA's World Cup warm-up tournament in Russia, also left many in the stadium unsure what match officials were doing. Communication was unclear during reviews lasting minutes instead of a handful of seconds, which was the target suggested in 2016 when the protocol for using VAR was shaped and trials began.

UEFA has already ruled out using VAR in the Champions League next season, and the English Premier League is also waiting to see if the system can prove itself essential. Still, the International Football Association Board's approval was expected on Saturday because FIFA controls four of the eight votes. The four British soccer associations, which created IFAB in 1886, have one vote each, and six are needed to approve an idea. FIFA's historical reluctance to embrace technological help for referees changed at the 2010 World Cup, after an England goal was not given despite Frank Lampard's shot clearly crossing the German goal-line. Germany went on to win the last 16 game 4-1. Also on Saturday, the IFAB panel used evidence from two years of trials to approve teams using a fourth substitute during the 30 minutes of extra time in knockout games. Teams can even use all four replacements in the extra periods if no changes were made in regulation time.