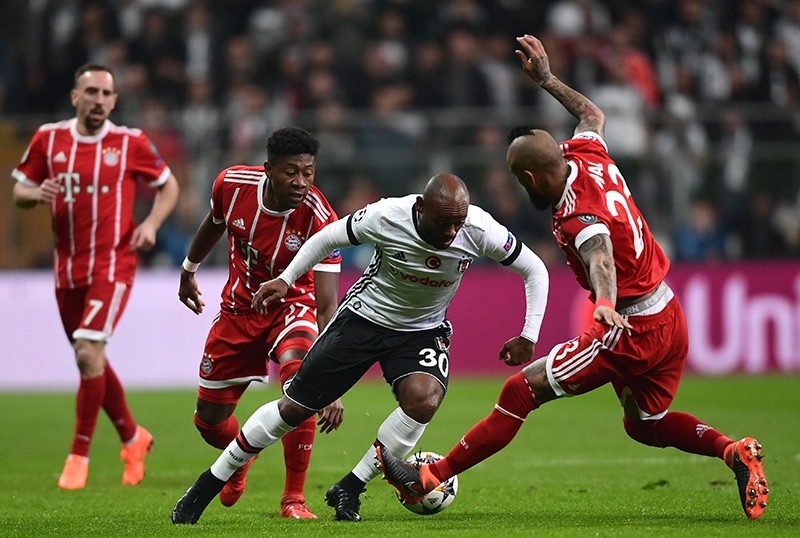 Bayern Munich advanced to the Champions League quarterfinals for the seventh straight year with a 3-1 win at Beşiktaş on Wednesday.

Thiago Alcantara, Gökhan Gönül's own goal and Sandro Wagner gave Bayern an 8-1 win on aggregate following the side's 5-0 victory in the first leg of the last-16 tie.

That result left Beşiktaş in need of the biggest comeback in the competition's history, and coach Şenol Güneş reacted with seven changes to the side that lost in Munich. Only Caner Erkin, Gary Medel, Ricardo Quaresma and Vagner Love kept their places.

Bayern's Jupp Heynckes sent arguably his strongest side out as the 72-year-old became the first coach to claim 11 consecutive wins in the Champions League.

Spanish midfielder Thiago Alcantara scored the first goal for Bayern in the 18th minute. Gökhan Gönül's own goal at the start of the second half made it 2-0 for Bayern, minutes before a cat on the sideline caused referee Michael Oliver to halt the game briefly. It resumed after the cat jumped back over the advertising hoarding.

Love got the fans cheering again when Gönül pounced on a mistake from David Alaba to set the Brazilian up for Besiktaş' consolation goal before the hour-mark.

Alaba atoned by setting up Wagner for Bayern's third in the final minutes.

The home fans spent the last 15 minutes celebrating their side, singing and waving their flags in recognition of the team's campaign. Beşiktaş was playing in the knockout stages for the first time after topping its group ahead of Porto, Monaco and Leipzig.

"We completed the job and now we'll look ahead to the next round," Mueller said.

The only concern for Bayern was an apparent foot injury for Thiago, who was visibly frustrated as he went off in the 35th for James Rodriguez.

"I don't think it's too serious," Heynckes said.

"It was a convincing result," Heynckes added. "Beşiktaş hadn't lost here in the Champions League, so it wasn't easy."

"We scored at the right times and it's normal that we dropped off a little -- losing some focus after winning 5-0 is just human."

"The only negative today is that we picked up too many yellow cards," he added after defenders Jerome Boateng, Mats Hummels and Rafinha all earned bookings.

So far, Real Madrid, Roma and Bayern Munich punched their ticket to the last 8, as Barcelona and Chelsea will clash at famous Nou Camp stadium in the other match of the evening.

The first match ended as a 1-1 draw in London.