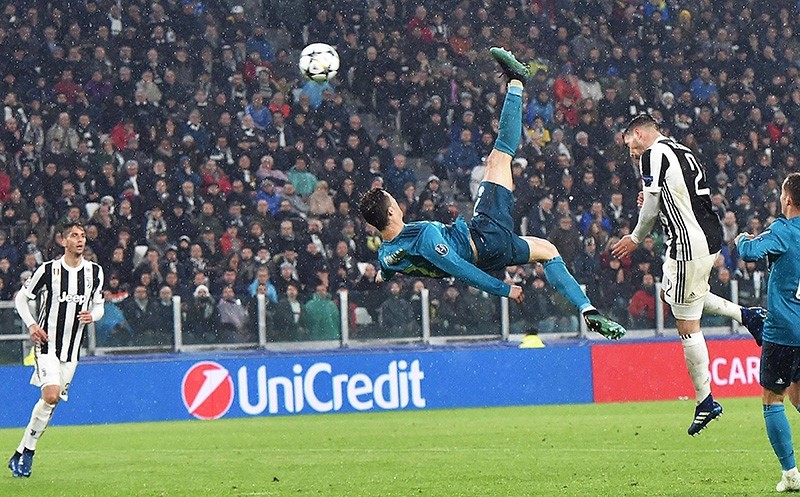 The Spanish press honored him with an Italian headline but the praise came in all languages and from all sides after Cristiano Ronaldo scored one of the greatest goals in Champions League history on Tuesday.

The 64th-minute bicycle kick, Ronaldo's second goal of the match, came in a 3-0 win over Juventus on Tuesday in the first leg of the Champions League quarterfinals.

"I had also scored another one similar, but I have to say, this one was spectacular. I jumped very high and obviously it's a goal that will live long in the memory," Ronaldo said. "Certainly it's my best goal."

The goal was so good that even the Juventus fans rose to applaud Ronaldo — after previously jeering his every touch.

"It was one of the greatest moments of the night for me," Ronaldo said. "To be applauded in a stadium like this, which has been graced by so many great players, was a top moment for me. I'm really happy.

"I was moved because when I was a kid, I always liked Juventus and the fact that their fans have applauded me will stay in my heart and is a great memory. To all of the Italians in the stadium, I just want to say 'Grazie.'"

Cristiano Ronaldo was described as a different species and even earned praise from basketball great LeBron James after his jaw-dropping bicycle kick in Real Madrid's 3-0 win at Juventus which likely sealed their place in the Champions League semi-finals.

"What planet did you come from?," asked the front cover of daily AS on Wednesday as it depicted Ronaldo's awesome strike, his second goal of the night which proved a knockout blow to Juventus just as they were gaining in confidence in the second half.

Spanish newspaper Marca simply hailed the acrobatic strike as "The Goal" on its front cover. Inside, it described Ronaldo as "Di Stefano 2.0", highlighting that Real had not beaten Juventus away since the late Alfredo di Stefano scored the only goal in a 1962 European Cup quarter-final first leg win.

Di Stefano is widely regarded as Madrid's greatest ever player for leading them to five consecutive European Cups. Ronaldo, who is the only player alongside the Argentine to score in at least three European Cup finals, took another step to joining him on the throne with his phenomenal goal.

"Cristiano Ronaldo can now leave earth and start playing against the Martians. He has done everything here," tweeted former Real teammate Alvaro Arbeloa after the goal, which even prompted Juventus supporters to rise to their feet in applause.

Real coach Zinedine Zidane clinched the club's ninth European Cup with a whirlwind volley against Bayer Leverkusen in 2002 although the Frenchman admitted he was "a little bit jealous" of Ronaldo's thumping strike.

There was even recognition from a giant of a different sport as three-time NBA champion James of the Cleveland Cavaliers joined in the praise, telling Ronaldo in a post on Instagram: "that's not even fair".

Ronaldo had scored twice against Juventus in last year's Champions League final win in Cardiff and took under three minutes of Tuesday's quarter-final first leg to haunt the Italian giants again as he fired in Isco's cut-back, netting for a record tenth consecutive Champions League game.

A four-time Champions League winner, Ronaldo is the leading scorer in Europe's top competition for the seventh season in a row, on 14 goals in nine appearances this campaign, three from equalling his record of 17 strikes in the 2013-14 season.