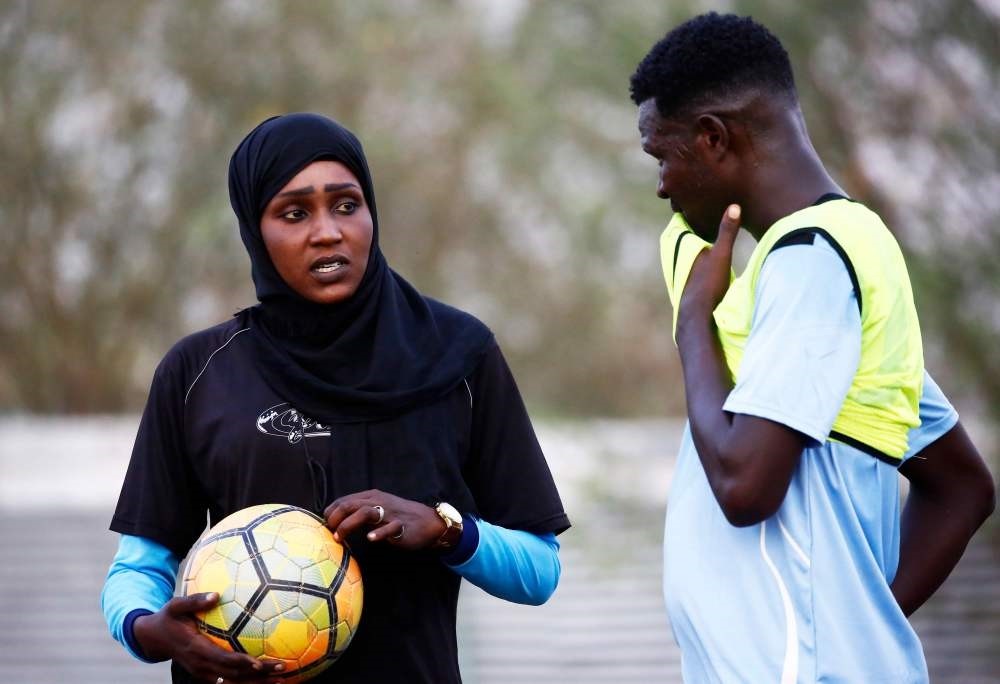 Salma al-Majidi, acknowledged by FIFA as the first Arab and Sudanese woman to coach a men's football team in the Arab world, instructs the Al-Ahly Al-Gadaref club during a training session in the town of Gedaref, east of Khartoum.
by Apr 04, 2018 12:00 am

Salma al-Majidi, 27, acknowledged by FIFA as the first Arab and Sudanese woman to coach a men's football team in the Arab world, is a pioneer in a sport that dominates the region.

"Why football? Because it is my first and ultimate love," said Majidi, clad in sports gear and a black headscarf, as she led players of the al-Ahly al-Gadaref club at a practice session in the town of Gadaref, east of Khartoum.

"I became a coach because there is still no scope for women's football in Sudan," said Majidi, who is affectionately called "sister coach" by her team. Daughter of a retired policeman, Majidi was 16 when she fell in love with football. It came about as she watched her younger brother's school team being coached. She was captivated by the coach's instructions, his moves, and how he placed the marker cones at practice sessions.

"At the end of every training session, I discussed with him the techniques he used to coach the boys," Majidi told reporters, as she watched her own players practicing on a hot day at a dusty ground in Gadaref. "He saw I had a knack for coaching... and gave me a chance to work with him."

Soon Majidi was coaching the under-13 and under-16 teams of the al-Hilal club in Omdurman, the twin city of Khartoum on the west bank of the River Nile. Questions like whether she understood football or had the skills to coach men were all put to rest over time, said Majidi, speaking in a soft but confident tone. Named in the BBC's 2015 list of "100 inspirational women," Majidi has coached the Sudanese second league men's clubs of al-Nasr, al-Nahda, Nile Halfa and al-Mourada. Nile Halfa and al-Nahda even topped local leagues under her coaching. She currently holds the African "B" badge in coaching, meaning she can coach any first league team across the continent. The only other woman to have gained recognition in Sudan's footballing world was Mounira Ramadan, who refereed men's matches in the 1970s.

Sudan joined FIFA in 1948 and established the Confederation of African Football (CAF) along with Egypt, Ethiopia and South Africa. It won the CAF trophy in 1970. In Sudan, women do play football but there are no competitions or women's clubs, and they do not play much in public.

"There are restrictions on women's football, but I'm determined to succeed," Majidi, whose dream is to coach an international team, said, as her players kicked up clouds of dust practicing free kicks.