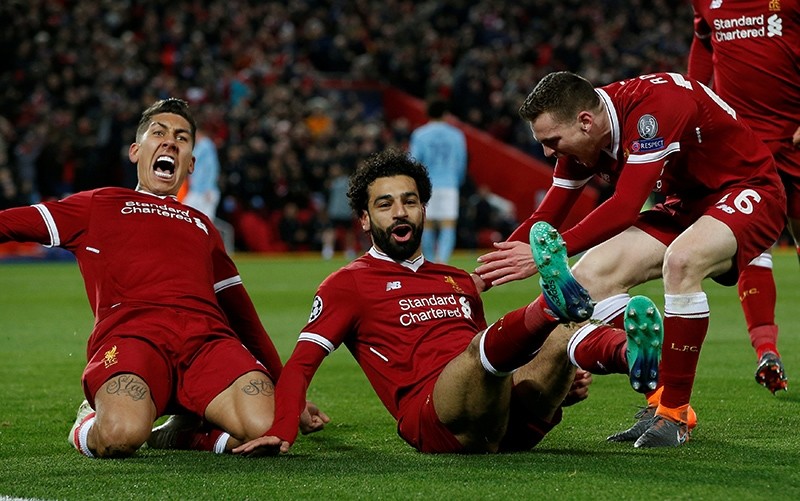 Barcelona and Liverpool both earned a comfortable 3-goal advantage against their respective opponents in the UEFA Champions League quarter-final first leg Wedesnday.

Manchester City's players learnt just why a trip to Liverpool can be one of the most uncomfortable experiences in European soccer.

On an evening that will go down in the club's long and storied lore, Liverpool reduced the best team in England to a rattled wreck by beating City 3-0 in the first leg of their Champions League quarterfinal match, thanks to three goals in a devastating opening 31 minutes.

Mohamed Salah — with his 38th goal of the season — Alex Oxlade-Chamberlain and Sadio Mane all scored in front of The Kop, leaving City coach Pep Guardiola scratching his head as he paced his technical area and wondering where it all went wrong.

Was it the fact that his players came under attack before kickoff, with Liverpool fans chucking objects at City's team bus as it traveled along Anfield Road — the street running alongside the stadium — before turning into the ground?

Was it his tactical decision to drop winger Raheem Sterling and play an extra central midfielder in Ilkay Gundogan, a move that completely backfired?

Or was it the fact that Liverpool can so often be just too hot to handle going forward?

It might have been a mixture of the three. And it leaves City's dream of a treble — it has already won the League Cup and could clinch the Premier League on Saturday in record time — in tatters.

Meanwhile, Barcelona has likely started planning for the Champions League semi-finals after their 4-1 win over Roma.

Two own-goals, from Daniele De Rossi and Kostas Manolas, and a close-range finish from Gerard Pique, presented the Catalans with a flattering 3-0 advantage at the Camp Nou before Edin Dzeko snatched Roma a late away goal.

But, just as the Italians looked to have grabbed a lifeline, Luis Suarez restored the three-goal cushion, by scoring a fourth in the 87th minute.

It means Barca will head to Italy next week with a place in the last four firmly in their grasp but this was not a virtuoso attacking display.

Instead, they benefited from two fortuitous own goals and some careless Roma finishing. Ernesto Valverde's side are unlikely to meet as generous an opponent in the semis.