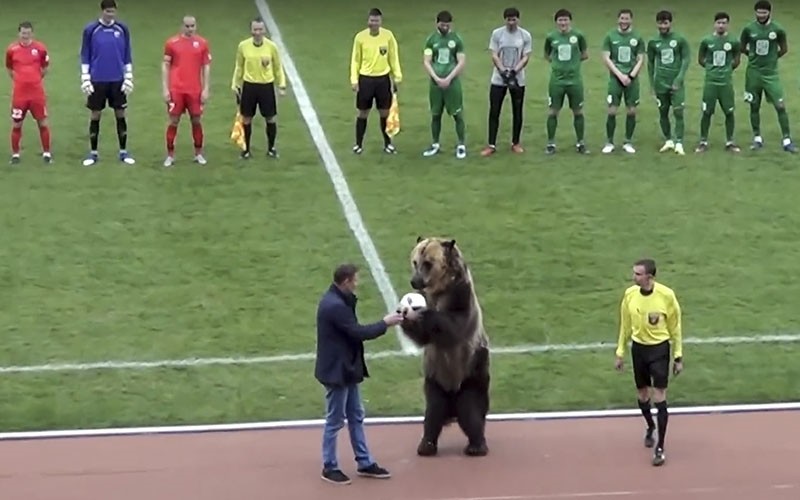 While Russia is trying to improve its infrastructure and image ahead of the World Cup in June and invigorate the country's football scene, controversial incidents involving animal cruelty have emerged in the country's stadiums

Animal rights groups have condemned the use of a bear that performed before a Russian soccer match.

The routine happened before a Russia second division match Sunday in the city of Pyatigorsk in the northern Caucasus. TV footage from the game showed the animal being led to the Mashuk-KMV Pyatigorsk club's stadium, clapping at spectators. The bear, named Tima, also held the ball before handing it over to the referee.

The stadium's announcer claimed that the bear will take part in the World Cup's opening ceremony in Moscow in June, but soccer authorities haven't confirmed that. The club's manager says it was borrowed from a circus.

The New York-based World Animal Protection group condemned the stunt Monday, saying that it's clear from the footage that "cruel training methods have been used" on the bear.

Elsewhere in Russia, a rooster was thrown onto the field in a second-tier soccer league as an apparent act of homophobic abuse against a coach.

Footage from Sunday's game between Fakel Voronezh and Luch-Energiya Vladivostok shows a fan picking up the apparently distressed bird, taking it to the front of the stand, and throwing it. The rooster flutters over to the touchline as the man cheers and makes an obscene gesture.

Other fans are heard chanting "Grigoryan is a rooster," a reference to Vladivostok coach Alexander Grigoryan. "Rooster" is often used as a term of anti-gay abuse in Russia.

Vladivostok fans have frequently aimed abuse at coach Grigoryan this season, and he's complained of receiving phone calls with threats. Grigoryan is unpopular in part because he used to coach a local rival.

Vladivostok was leading the game 1-0 at the time the rooster was thrown, but went on to lose 3-1, dealing a blow to its hopes of avoiding relegation. The club faces possible punishment from the Russian Football Union over Sunday's chicken-throwing.

Russia's Premier League is following the lead of its English counterparts by launching an animal logo to win over fans: a red-eyed bear.

While the English top flight has its iconic royal blue lion, Russia has launched a logo of its own national animal just two months ahead of the World Cup kick-off in the country.

The Moscow design studio behind Monday's re-branding announcement described the animal on its website as: "A bear with eyes burning with passion."

Russia's club football has struggled for recognition in the post-Soviet era despite being ranked sixth by European governing body UEFA.

Its reputation has been blotted by hooliganism and ramshackle stadiums built by Communist Party planners who valued austerity over comfort.

Teams such as Spartak Moscow and Zenit Saint Peterburg have faithful followings at home but are hardly a draw outside Russia.

The Russian Premier League hopes that is about to change.

The infusion of 12 new or refurbished arenas now opening at great expense for the World Cup is set to transform how the game looks and feels.

The Russian football association has started making a profit and is thinking up ways to capture a broader audience on TV.

This is where the black bear comes in.

The fierce looking beast -- replete with blood-red triangular eyes -- is meant to replace a bland 17-year-old logo featuring the map of Russia on a ball.

A spokesman for the Premier League said it may still undergo some finishing touches depending on what team owners and the fans say.

The league said in a statement it was hoping to use the new brand to "help create entertaining, competitive and commercially successful" football.

The reception so far has been one of pleasant surprise.

"The new Russian Premier League logo is actually not that bad," popular sports commentator Vasily Utkin wrote in a blog.

Editors behind Moscow's Sportbox.ru website immediately ran a poll asking: "What looks sharper -- the English lion or the Russian bear?"

The bear won by a handsome margin despite some fans saying in their responses that it looked either psychedelic or "on drugs".

Russia has turned to its national symbol in times of need in the past.

The ruling United Russia party adopted the animal in its logo as part of its appeal to voters in the first years of President Vladimir Putin's rule.

It was the mascot of Moscow's 1980 Summer Olympics and is the symbol of Russia's special forces and various army units.

Utkin, though, admitted that a spunky new bear on its own will probably not do all that much to make Russian football more attractive.

"But no logo ever did that -- not in flourishing leagues or in problematic ones like ours," Utkin wrote.