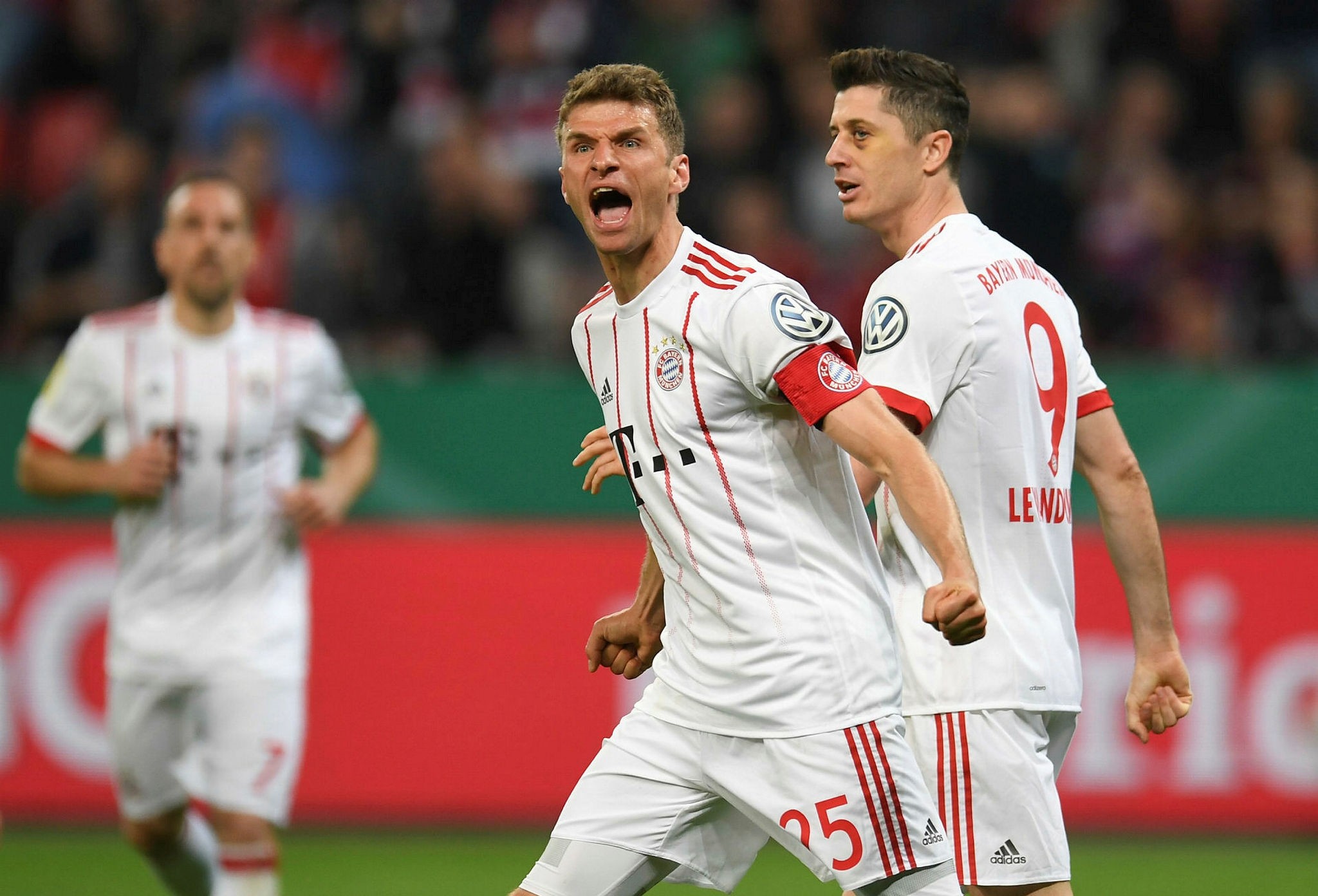 Thomas Mueller scored a hat-trick as Bayern Munich remained on course towards a title treble with an impressive 6-2 triumph at Bayer Leverkusen on Tuesday for a place in the German cup final.

Javi Martinez in the third and Robert Lewandowski in the ninth gave Munich a quick 2-0 lead, Mueller struck in the 52nd before completing his hat-trick in the 64th and 77th, after Thiago Alcantara found the net on the hour. Lars Bender and Leon Bailey scored for Leverkusen.

Ruthless Bayern reached the final a 22nd time and will be bidding for an 19th title (both records) on May 19 against Schalke or Eintracht Frankfurt who contest the other semi-final Wednesday.

The Bavarians have already clinched the Bundesliga and are in the Champions League semi-finals where they face holders Real Madrid - looking to repeat the title treble from 2013, with Jupp Heynckes the departing coach then and now.

"The game was fun. Both teams attacked and it was a perfect night for us. But despite the scoreline of 6-2 it was an intense game," Mueller told Sky TV.

"Of course we are hungry. Lets see what happens over the next two weeks."

Leverkusen forward Kevin Volland said: "The scoreline was a little too much. We didn't get into he game at all after the break. We had a chance for 2-2 but didn't make it. Bayern scored with almost every chance."

Bayern had a dream start against the hosts who had impressed in the league lately to rank third.

Martinez drilled home into the bottom right corner from the edge of the area, after Bernd Leno had saved Mueller's header. Six minutes later Franck Ribery ran past two defenders, lobbed the ball across the goalmouth for Lewandowski to volley home into the far left corner.

Leverkusen were back in the game when Bayern twice failed to clear Julian Brandt's free-kick, allowing Bender to head home in the 15th.

Leverkusen brought on the fast Bailey for the second half and came close to 2-2 in the 49th but Volland's shot was blocked and Munich goalkeeper Sven Ulreich made a big save from Karim Bellarabi.

Instead, it was clinical Bayern who struck again in the 52nd to restore the two-goal advantage, Thiago Alcantara finding the unmarked Mueller to slot home for 3-1.

Volland had a goal disallowed for offside in the 59th before rampant Bayern continued their scoring spree, Robben setting up Thiago to wrong-foot Leno on the hour and Robben's low shot then hitting Mueller's foot before rolling in four minutes later.

Bailey curled home a free-kick in the 72nd but Mueller had the last laugh after turning around a defender as Bayern eliminated their latest strong opponents after earlier-round wins over RB Leipzig and Borussia Dortmund.