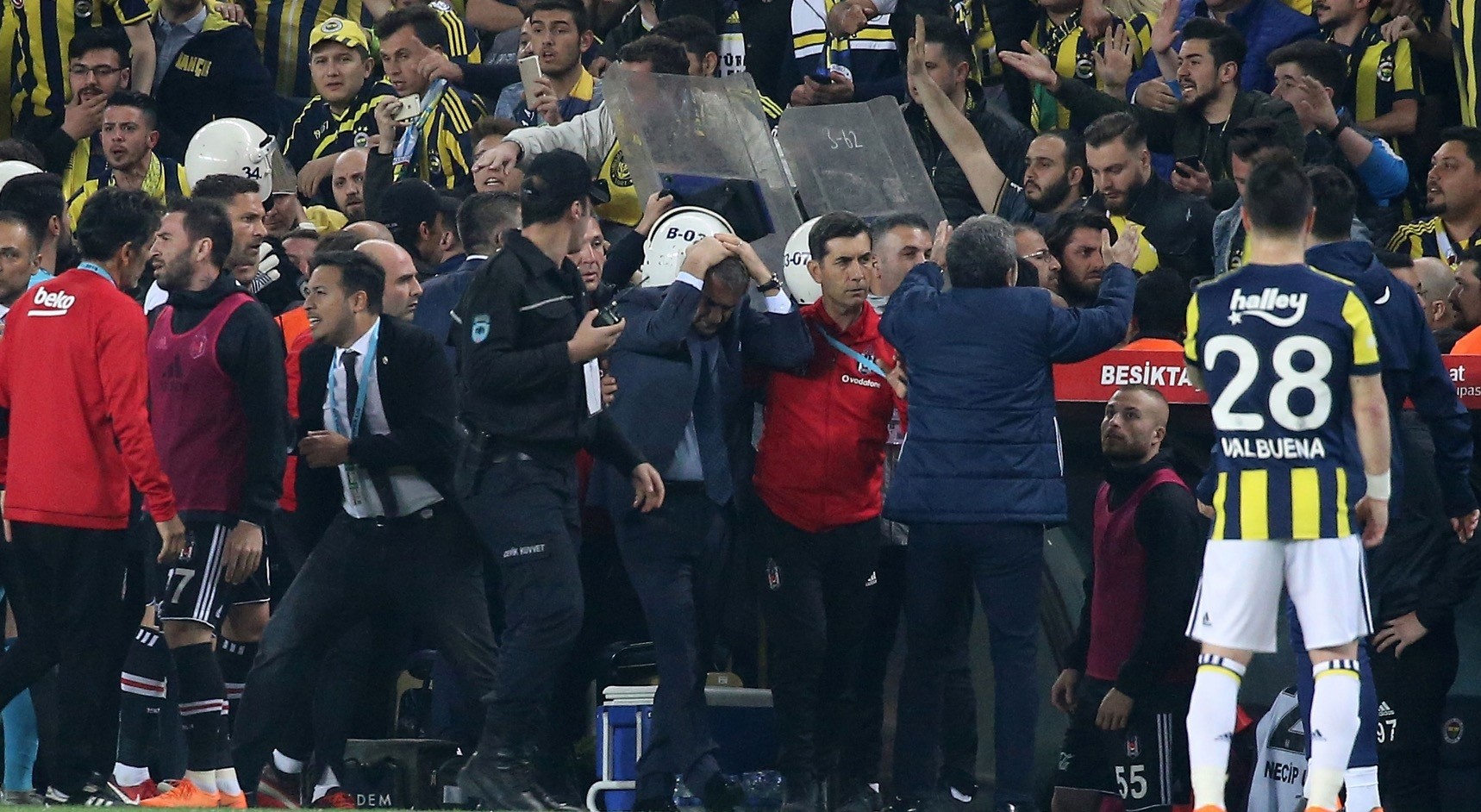 A derby between Istanbul football giants Fenerbahçe and Beşiktaş was abandoned Thursday after Beşiktaş coach Şenol Güneş was injured by objects flung from the stands. The incident adds to ten- sions as the Turkish league season heads to its climax, with all four big Istanbul sides - Beşiktaş, Fenerbahçe, Galatasaray and Başakşehir - in contention for the title. The Turkish Football Federation (TFF) announced Friday that it will make a decision over the outcome of the match in a meeting on April 25.

Reports suggested that the TFF may decide on a replay or award Beşiktaş a 3-0 win over Fenerbahçe by forfeit. Meanwhile, the Anadolu Chief Public Prosecutor's Office in Istanbul launched a probe into the incident. A suspect with several others linked to the incident was arrested after Turkish security forces viewed camera footage. The fan identified by his initials S.D., said in his statement, "I threw the lighter in my hand. I did not mean to hit Güneş." It was also revealed that he has previous criminal records.

President Recep Tayyip Erdoğan on Friday pointed out a 'plot' during the derby. Speaking to reporters in Istanbul after Friday prayers, Erdoğan said: "It is beyond football terrorism. I have to speak a little bit clearly. There was also a plot." Erdoğan said he called Güneş and wished him a speedy recovery, adding it is "impossible" to forgive what was done to him. "Some people organized this terror at the tribunes. This did not happen spontaneously," he said. Beşiktaş President Fikret Orman lambasted security at the stadium and said Güneş was in good health after he was discharged from hospital later. Orman said, "A sad day for Turkish football."

Fenerbahçe President Aziz Yıldırım said, "There was a dirty plot."

The Istanbul derby had been briefly halted several times before the incident occurred in the 58th minute of the goalless second leg. Güneş fell to the ground after being hit by the object and was taken to hospital where he needed five stitches. Beşiktaş players and the referees left the pitch following the incident. Güneş, the legendary former Turkish international goalkeeper has led Beşiktaş to two consecutive championship titles. On Wednesday, Akhisarspor ousted Galatasaray and reached the Turkish Cup final.