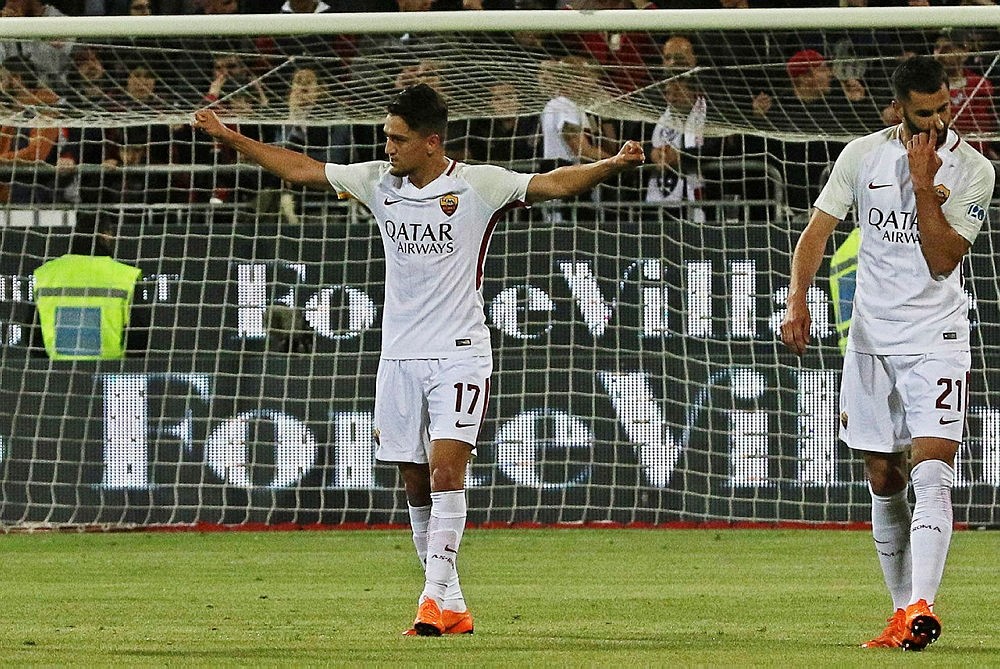 Roma's Cengiz Under, left, celebrates after scoring the 1-0 lead during the Italian Serie A football match between Cagliari Calcio and AS Roma at Sardegna Arena Stadium in Cagliari, Italy, May 6, 2018. (EPA Photo)
by Daily Sabah May 06, 2018 12:00 am

Roma beat Cagliari 1-0 away from home in the Italian Serie A on Sunday following a hard Champions League exit this week.

The only goal in the game was scored by Roma's Turkish winger Cengiz Ünder. Fifteen minutes into the first half, Ünder sent a low-driven shot just inside the far post of the home side's goal.

Thanks to the latest win, Roma is now third, earning 73 points in 36 games, ahead of their Rome rival Lazio with 71 and Inter with 69. A single win in the last two matches of the season would secure Roma's place in the Champions League next season.

Meanwhile, Juventus has the champagne on ice after Napoli was held to a 2-2 draw by Torino on Sunday to all but mathematically hand the Bianconeri their seventh straight Serie A title.

Napoli is six points behind Juventus with two matches remaining. The two sides have the same head-to-head record — which is the next deciding factor — but Juventus has a significantly better goal difference.

Juventus can mathematically secure the title at Roma next weekend.