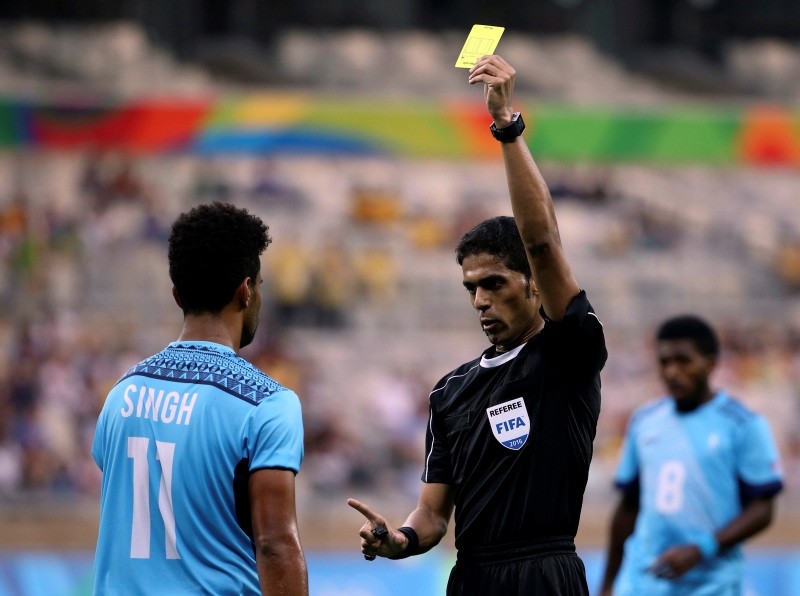 In this Aug. 10, 2016 file photo, Fiji's Alvin Singh is yellow carded by referee Fahad Al Mirdasi during a group C match of the men's Olympic football tournament between Germany and Fiji at the Mineirao Stadium in Belo Horizonte, Brazil. (AP Photo)
by Associated Press May 13, 2018 12:00 am

A referee selected by FIFA to go to the World Cup has been placed under investigation in Saudi Arabia and prevented from taking charge off a cup final.

Fahad Al Mirdasi was due to referee the King's Cup final on Saturday before being referred to administrative investigators, the Saudi Football Federation said.

The federation statement on Twitter did not specify the nature of the investigation into the 32-year-old Al Mirdasi. It said the decision was approved by the Saudi Olympic Committee, whose president, Turki al-Sheikh, also runs the General Sports Authority.

Al Mirdasi is one of 36 referees chosen by FIFA to work the 64 games at the World Cup, which kicks off in Moscow on June 14.

"The matter is with the Saudi Arabian Football Federation," world football's governing body told The Associated Press. "FIFA has no further comment."

Al Mirdasi was selected for last year's Confederations Cup, which served as the World Cup warm-up tournament in Russia. He oversaw the third-place game between Mexico and Portugal where two penalties were awarded, two players were sent off in extra time and Mexico coach Juan Carlos Osorio was also dismissed.

Al Mirdasi was also a referee at the 2016 Rio de Janeiro Olympics.

He was replaced overseeing the King's Cup final in Jeddah on Saturday by Mark Clattenburg, who was set to be selected for the World Cup before leaving England last year to take a job heading refereeing in Saudi Arabia.