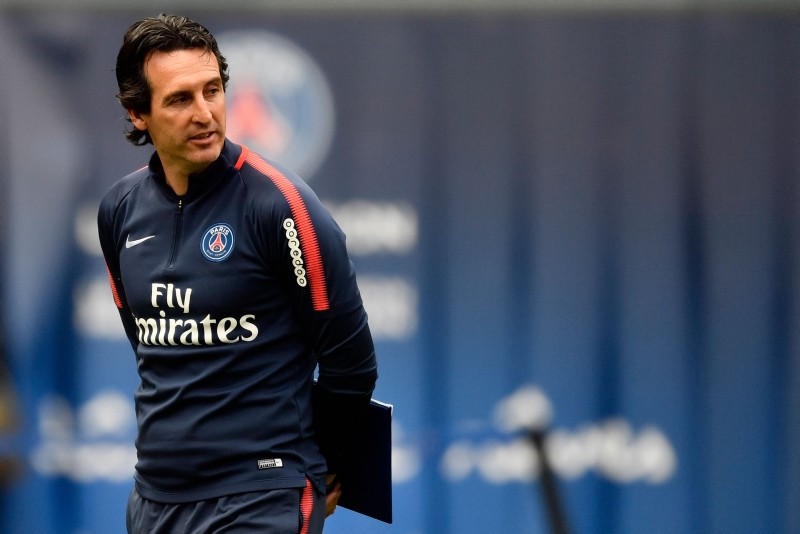 In this file photo taken on May 16, 2018, Paris Saint-Germain's Spanish headcoach Unai Emery attends a training session in Paris at the Parc des Princes. (AFP Photo)
by reuters
May 23, 2018 12:00 am

Spaniard Unai Emery said he was excited to start a "new chapter" for Arsenal after becoming the Premier League club's first new manager for 22 years on Wednesday.

The 46-year-old has been hired to fill the sizeable void left by the departure of Frenchman Arsene Wenger who had been at the Arsenal helm since 1996.

"I am thrilled to be joining one of the great clubs in the game," Emery, who spent the past two seasons at Paris St Germain, taking them to a domestic treble this season, told the Arsenal website https://www.arsenal.com.

"Arsenal is known and loved throughout the world for its style of play, its commitment to young players, the fantastic stadium, the way the club is run.

"I'm very excited to be given the responsibility to start this important new chapter in Arsenal's history."

Arsenal chief executive Ivan Gazidis said Emery had emerged as the strongest candidate after a "wide-ranging and rigorous search" for Wenger's replacement.

"Unai has an outstanding track record of success throughout his career, has developed some of the best young talent in Europe and plays an exciting, progressive style of football that fits Arsenal perfectly," he said.

"His hard-working, passionate approach and his sense of values on and off the pitch make him the ideal person to take us forward."

Emery won the Ligue 1 title, the French Cup and the League Cup this past season in Paris. Before his time in France he spent three years at Sevilla, winning three consecutive Europa League trophies. He has also had spells in Spain with Valencia and Almeria after beginning his coaching career with Lorca Deportiva.

The only blot on his managerial copybook was a short spell at Spartak Moscow where he was sacked in 2012.

He will have an immediate chance to impress again in the Europa League next season, although his priority will be to restore Arsenal's place in the Premier League's top four, after they finished fifth and sixth in Wenger's last two seasons.

Arsenal finished 37 points behind champions Manchester City this season and closing that gap will not be easy.

While Arsenal have some outstanding players in the likes of Pierre-Emerick Aubameyang, Mesut Ozil and Alexandre Lacazette the squad will need strengthening.

Emery, however, will not have the financial resources he enjoyed at PSG who last year shattered the world transfer record to sign Neymar from Barcelona for 222 million euros ($260.25 million).

Arsenal are reported to have a 50 million pounds ($66.8 million) transfer budget this summer.

Majority owner Stan Kroenke, who holds the purse strings at the Emirates Stadium, said he was confident Emery had the skills to revive Arsenal's fortunes.

"He's a proven winner. We're confident he is the right person for the job and that he will work to deliver the triumphs our fans, staff and everyone who cares about Arsenal want," he said.

"He shares our vision to move forward, to build on the platform created by Arsene Wenger and help this club enjoy greater success."