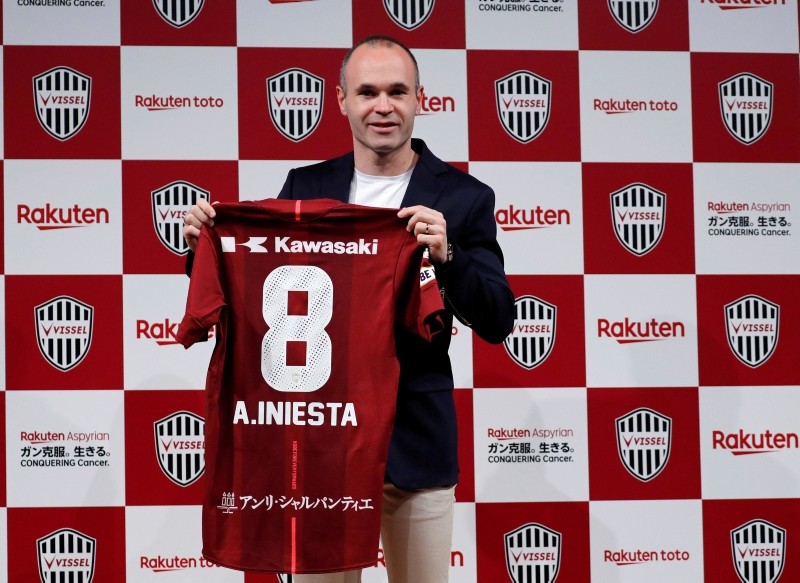 Spain midfielder Andres Iniesta poses with his T-shirt at a news conference to announce signing for J-League side Vissel Kobe in Tokyo, Japan, May 24, 2018. (Reuters Photo)
by Associated Press May 24, 2018 12:00 am

Iniesta appeared before a packed news conference at a central Tokyo hotel along with Kobe's billionaire owner, Hiroshi Mikitani.

"I'm pleased to announce," Mikitani said, "that Andres Iniesta will be signing up play with Vissel Kobe after his historic career at Barcelona."

Iniesta signed his contract as Mikitani watched, and then spoke through an interpreter.

Terms of the contract were not disclosed, but Japanese media are reporting he will earn $30 million annually on a three-year deal.

"For me this is a very special day," the Spaniard said. "This is an important challenge for me. My family is excited to come to Japan and we are very pleased. There were many offers. Other clubs showed interest. But I decided to sign with Vissel Kobe because the project presented to me was impressive."

Mikitani is also the CEO of Barcelona sponsor Rakuten, a Japanese online retailer.

Iniesta held up the team's red shirt with his famous No. 8 on the back, and his name written across the bottom.

Iniesta previously had said he would probably retire from international soccer after Spain plays at this year's World Cup in Russia.

The 34-year-old Iniesta scored the winning goal for Spain in the 2010 World Cup final. He also was a key part of Spain's two European Championships in 2008 and 2012.

He announced last month he would leave Barcelona after 16 seasons. His last match for the Spanish club was on Sunday against Real Sociedad at Camp Nou.

Vissel Kobe is in sixth place after 15 games in the J-League. It signed Lukas Podolski last year, but the German striker is out until the end of June with an injured calf.