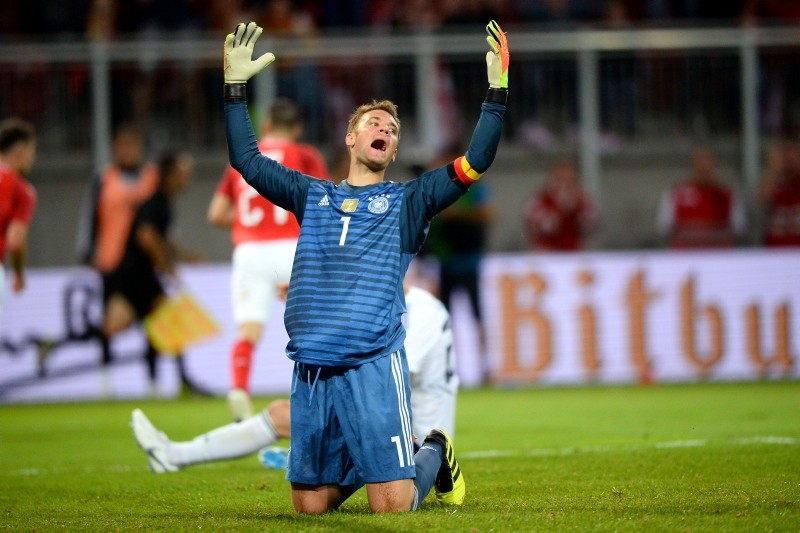 Germany captain Manuel Neuer was included in the final 23-man squad for the World Cup in Russia on Monday having proved his fitness following injury but Manchester City forward Leroy Sane was surprisingly dropped.

While goalkeeper Neuer could breathe a sigh of relief, there was heartbreak for fellow stopper Bernd Leno, defender Jonathan Tah and forward Nils Petersen, who, alongside Sane, were cut from coach Joachim Loew's preliminary squad.

Bayern Munich's Neuer, 32, missed most of the season with a broken foot and played for the first time since September in Germany's 2-1 defeat at Austria on Saturday. Loew has already said Neuer will start as his number one in Russia.

"There are definitely nicer days in the life of the national coach than when you have to send home four fantastic players who would have deserved to go to the World Cup," Loew said. "We are still convinced of their quality.

"The disappointment of those affected is great. We have obviously not made the decision lightly, it was incredibly close."

Neuer, who played as Germany lifted the trophy four years ago in Brazil, was given as long as possible to recover fully.

But though he is undisputedly one of the best keepers in the world, there is still an element of risk on relying on a player so lacking in match practice.

Barcelona keeper Marc-Andre ter Stegen deputized for Neuer during his absence and will be back-up in Russia. Paris Saint-Germain's Kevin Trapp edged out Leno, of Bayer Leverkusen, to make the squad as third-choice.

Tah, another Leverkusen player, was also cut in a move that was expected while Freiburg's Petersen - who only made his Germany debut against Austria - is unlikely to be shocked at losing out to VfB Stuttgart striker Mario Gomez for a place.

Sane in contrast could feel hard done by after being named young player of the year in the Premier League following a strong campaign with City. The winger contributed 10 goals from 32 appearances as City won the championship at a canter and also added the League Cup for good measure.

There is also a strong core from German champions Bayern with Niklas Suele, Mats Hummels, Thomas Mueller, Jerome Boateng, Joshua Kimmich and Sebastian Rudy joining their club team-mate on the plane. Schalke's Leon Goretzka will join Bayern on a free transfer after the World Cup.