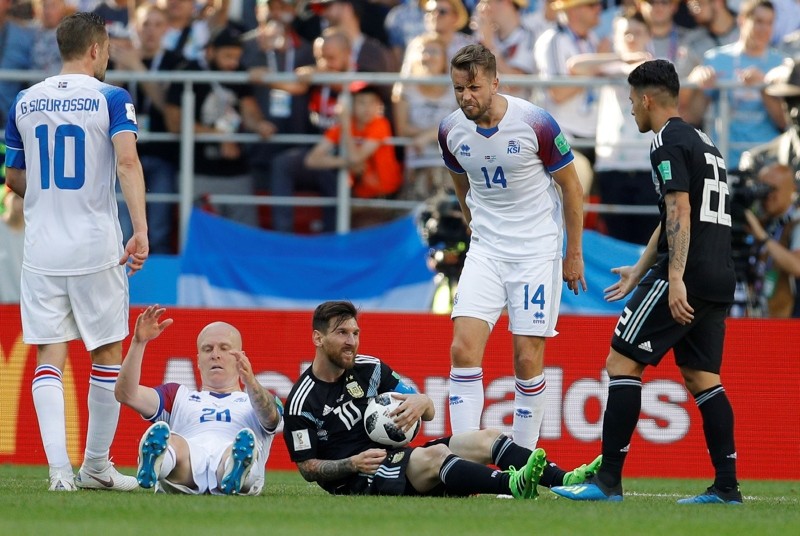 Lionel Messi missed yet another penalty kick and Iceland held on for a 1-1 draw against Argentina in an impressive World Cup debut on Saturday.

Messi failed to give his team the lead when his 64th-minute penalty was stopped by Hannes Halldorsson. The Iceland goalkeeper dived to his right and got two hands behind the ball.

It was Messi's fourth missed penalty in his last seven attempts for Argentina and Barcelona.

The Argentines took the lead in the 19th minute when Sergio Aguero scored with a rising left-footed shot. Alfred Finnbogason equalized for Iceland four minutes later after Argentina goalkeeper Willy Caballero pushed a low cross into the forward's path.

The penalty was awarded after Aguero was pushed in the back by Hordur Magnusson as both chased Messi's floated cross in the 63rd.

The small Nordic island nation's team created several first-half chances despite having only 22 percent possession, and pushed back Argentina's waves of second-half attacks.

Messi had a final chance to redeem his team with the final kick of the game, but his free kick from 25 yards failed to clear a solid Iceland defensive wall.

At the end, Messi retreated alone into the center circle with his head bowed and hands on his knees.

Iceland played its debut on soccer's biggest stage like it belonged alongside the 2014 runners-up. Before trailing, Iceland could have taken the lead but Birkir Bjarnason side-footed a shot wide of goal when Caballero was exposed.

That chance came in a nervous ninth minute for Argentina's defense, which seemed unsettled by Iceland's strength and their own unease with loose balls in the penalty area.

No Iceland defender was at fault for failing to stop Aguero's goal. The forward executed a classy spin move to create his chance when a miscued shot by Marcos Rojo arrived at his feet near the penalty spot.

It was a finish worthy of Argentina great Diego Maradona, who was watching in the VIP section at Spartak Stadium. The FIFA ambassador was puffing a large cigar despite smoking being banned in all World Cup venues.

Argentina fans booed and whistled when the giant stadium screen showed that Halldorsson was man of the match. But his faultless handling and excellent shot-stopping was deserving of the accolade.

In contrast, Caballero caused uneasy moments for his defense in the first half.

Messi has missed more than 20 penalty kicks in his career, showing there is perhaps one flaw in his genius.

This was the first game in Group D, which looks even more evenly balanced now than it did at kickoff. Croatia and Nigeria are also in the group.

Argentina will next play Croatia on Thursday in Nizhny Novgorod, while Iceland plays Nigeria on Friday in Volgograd.