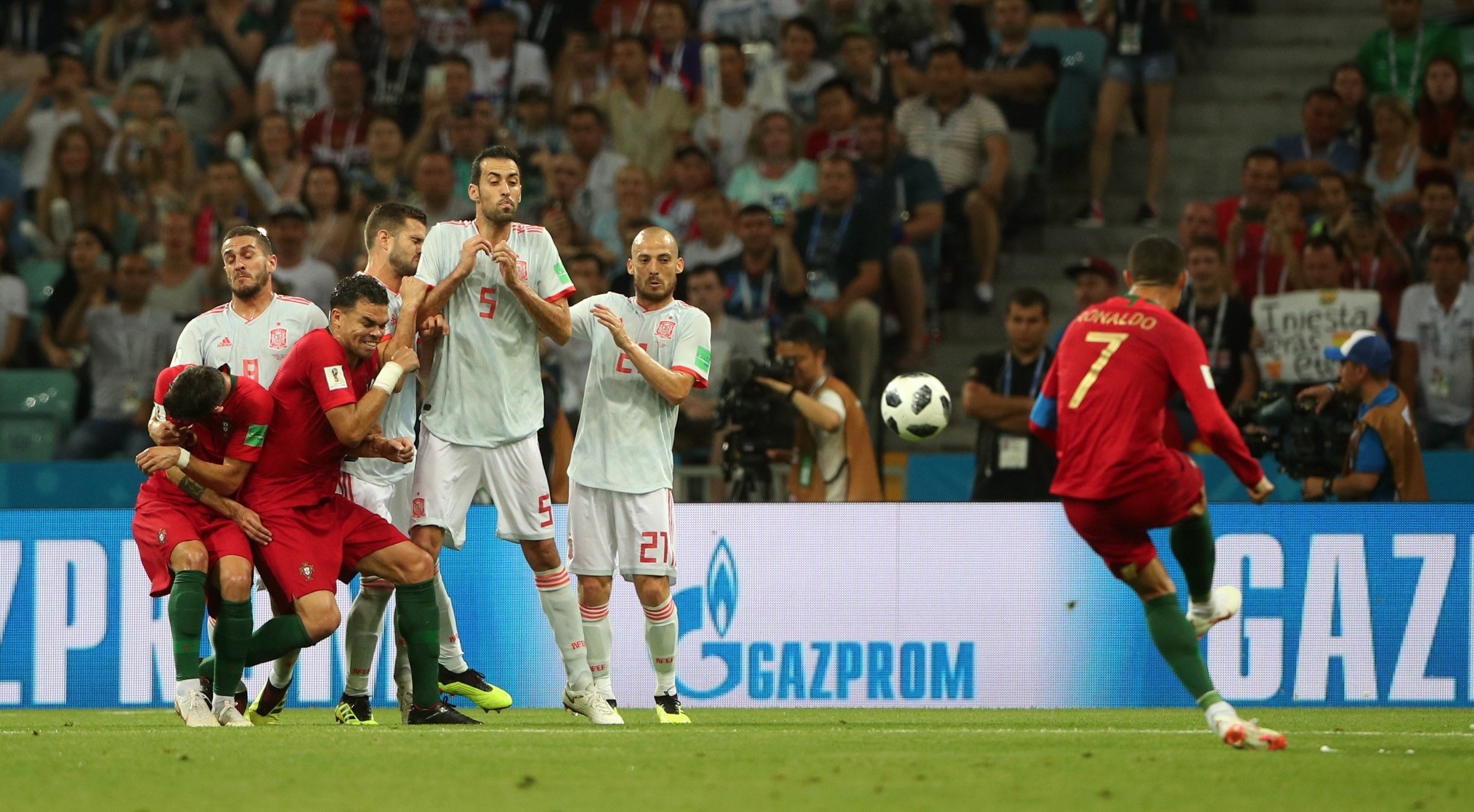 Portuguese star Ronaldo achieved his hat trick in the 3-3 draw with Spain, only with the help of a penalty and free-kick.
by Compiled from Wire Services Jun 21, 2018 12:00 am

VAR and a trio of spectacular free kicks have led to a spike in the number of goals from set plays in Russia, with some already calling it ‘the World Cup of set pieces'

Set pieces are becoming more and more important in a very evenly balanced World Cup - clearly evident after all 32 teams have now played their first games. Penalties, free kicks and corner kicks have led to 21 of the 42 goals scored in Russia after 17 of 64 games by Tuesday night. The 50 percent share is more than double the 22 percent from Brazil 2014, a tournament that saw 38 of the 171 goals from set pieces. There were 13 penalties awarded during the whole of the 2014 World Cup in Brazil, not including penalty shootouts. There have already been 10 awarded in Russia even though the tournament is still only in its early stages. VAR has vastly increased the number of spot kicks because more infringements are being seen than before. It led to one joke doing the rounds on social media saying that the Video Assistant Referee (VAR) system, which is making its World Cup debut, will have more assists than Lionel Messi and Cristiano Ronaldo.

FIFA's technical study group already said in its 2014 report that "the importance of set pieces has grown considerably and every team uses them as an important attacking tool."

Japan's 2-1 win over Colombia Tuesday could serve as a blueprint as the Asians won from a penalty and after a corner-kick against the South Americans who found the net via a free kick.

The free kick number of three in Brazil has already been exceeded in Russia as Portugal's Cristiano Ronaldo, Alexander Golovin of Russia, Serbia's Aleksandar Kolarov and Juan Quintero of Colombia have converted four of them. The Adidas Telstar 18 ball used for this World Cup was supposed to be more stable in the air. Not so, say several goalkeepers, including Russia's Igor Akinfeev, who believes the ball at this tournament is partly responsible for goals from long-distance such as Philippe Coutinho's curler from open play for Brazil and free kicks like the ones by Ronaldo and Kolarov.

The free-kick spray introduced in 2014 has helped, and so has the debut of the video assistant referee (VAR) in Russia, with three penalties awarded this way.

"We are working on these elements in training," said Croatia's Luka Modric, who converted one of the penalties after an own goal following a corner gave his side an opening 2-0 win over Nigeria.His coach Zlatko Dalic agreed, saying: "Corners and penalties are important elements of football. It doesn't matter how you score - what counts is that you score."

Even mighty Cristiano Ronaldo achieved his hat trick in the 3-3 with Spain, only with the help of a penalty and free-kick. And regardless of their overall quality, title holders Germany would also welcome a first goal in Russia from a set piece after losing the first game 1-0 against Mexico.

"We have trained set pieces. They are important because you can get a lot out of them," Germany coach Joachim Loew said.