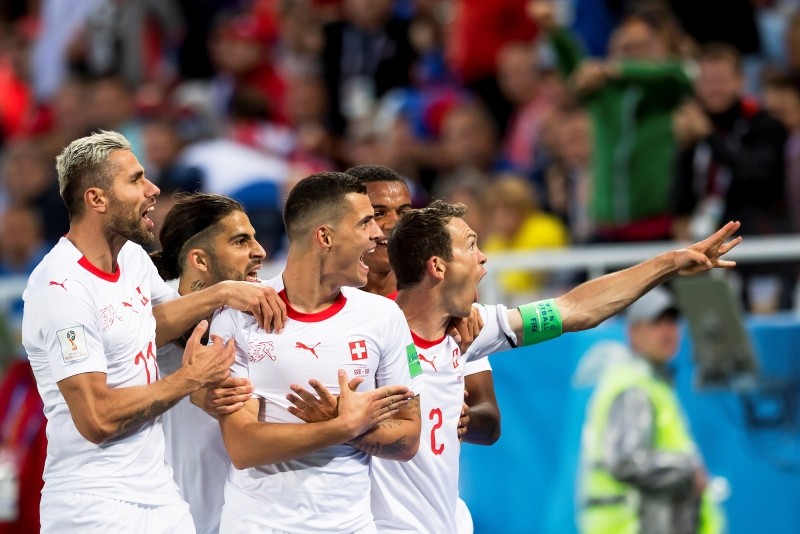 Switzerland's midfielder Granit Xhaka, center, celebrates with his teammates after scoring the 1-1 equalizer during the FIFA World Cup 2018 group E football match between Switzerland and Serbia in Kaliningrad, Russia, June 22, 2018. (EPA Photo)
by Daily Sabah with Agencies Jun 22, 2018 12:00 am

Goals by Albanian origin players — Granit Xhaka and Xherdan Shaqiri — secured Switzerland's first victory at the 2018 World Cup with a 2-1 triumph over Serbia in Group E on Friday in Kaliningrad.

Aleksandar Mitrovic tallied the opening goal of the match in the fifth minute for Serbia and was answered by Xhaka's blast in the 52nd minute.

That set up Shaqiri's heroics in the 90th minute in front of 33,167 fans at Kaliningrad Stadium.

Both put their open hands together with their thumbs locked and fingers outstretched to make what looks like the double-headed eagle displayed on Albania's national flag. The thumbs represent the heads of the two eagles, while the fingers look like the feathers.

The gesture is likely to inflame tensions among Serb nationalists and ethnic Albanians.

Shaqiri was born in Kosovo, the former Serbian province that declared independence in 2008. Serbia doesn't recognize Kosovo's independence and relations between the two countries remain tense. Xhaka's parents are originally from Kosovo and they are of Albanian heritage.

Switzerland moved into co-lead in Group E with four points along with Brazil while Serbia remained on three points. Costa Rica have zero points from two matches and are already ousted.