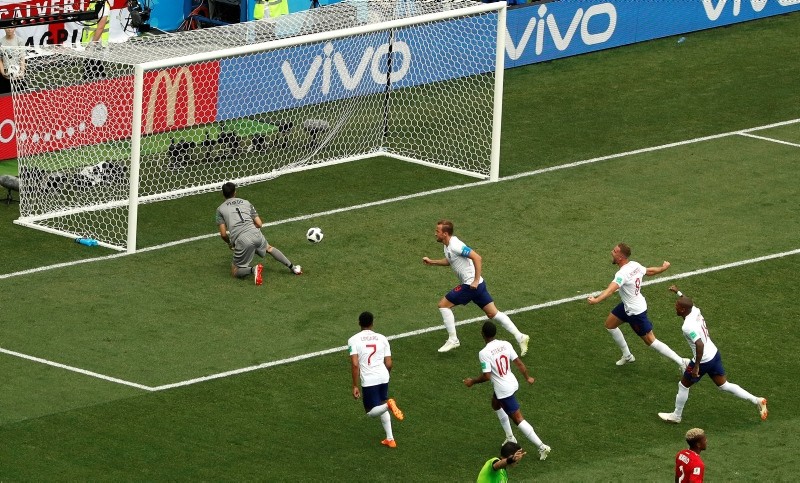 England's Harry Kane, top right, celebrates with teammates after scoring his first penalty during the group G match between England and Panama at the 2018 World Cup at the Nizhny Novgorod Stadium in Nizhny Novgorod, Russia, June 24, 2018. (AP Photo)
by daily sabah Jun 24, 2018 12:00 am

Five goals in the first half and one more in the second secured England's dominant 6-1 win against Panama group G match at the 2018 World Cup in Nizhny Novgorod on Sunday.

A hat-trick from Harry Kane, a brace from John Stones and a goal from Jesse Lingard saw England rout the Central Americans. But Felipe Baloy made history for Panama, scoring their first goal at a World Cup finals. 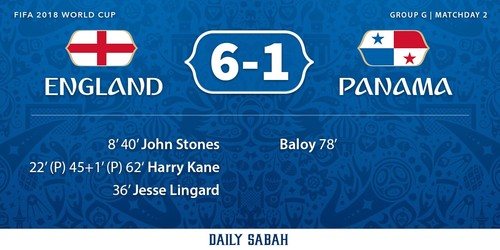 The result was England's biggest World Cup victory, with Kane's hat-trick only the third by an England player at the finals, after Geoff Hurst against West Germany in 1966 and Gary Lineker versus Poland in 1986.

Thanks to the win the Three Lions have now qualified for the round of 16 along with Belgium, whom they face in their final Group G fixture in Kaliningrad on Thursday.