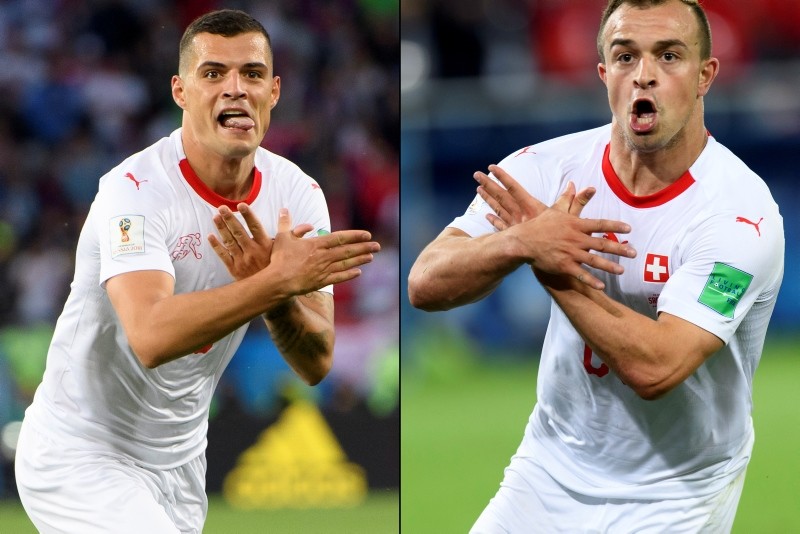 Switzerland players of Albainian descent, Granit Xhaka and Xherdan Shaqiri, face two-match bans over their goal celebrations against Serbia as FIFA said Saturday that its disciplinary committee has opened proceedings against the two.

Xhaka and Shaqiri celebrated their goals by making a nationalist symbol of their ethnic Albanian heritage. Both players put their open hands together with their thumbs locked and fingers outstretched to make what looks like the double-headed eagle displayed on Albania's flag. The thumbs represent the heads of the two eagles, while the fingers look like the feathers.

Under article 54 of FIFA's disciplinary code, "anyone who provokes the general public during a match will be suspended for two matches and sanctioned with a minimum fine of 5,000 Swiss francs ($5,058.7)."

Shaqiri was born in Kosovo, the former Serbian province that declared independence in 2008. Serbia doesn't recognize Kosovo's independence and relations between the two countries remain tense. Xhaka's parents are originally from Kosovo and they are of Albanian heritage. His brother plays for Albania's national team.

Years of war in Balkans sent many families to western European countries, including Switzerland. The Swiss have dozens of ethnic Albanians in their national soccer program.

"Anyone who experience the electric atmosphere of the game can appreciate more the performance of our national team and can understand the emotions which overcome a player," Defense, Civil Protection and Sports minister Guy Parmelin told the Neue Zurcher Zeitung (NZZ).

"I have no doubt that you can feel patriotic emotions for the land which has taken you in without forgetting your roots," he said. "It would be a hammerblow if they were to be suspended."

FIFA also said it has opened disciplinary proceedings against the Serbian Football Association for crowd disturbance and the display of political and offensive messages by Serbian fans. FIFA also is reviewing statements that Serbia coach Mladen Krstajic made after the match.

Serbia refuses to recognize the independence of its former province Kosovo, whose 1.8 million people are mostly ethnic Albanians, which broke away 10 years ago.

Both FIFA and its European counterpart UEFA keep Serbia and Kosovo apart when making the draw for international competitions.