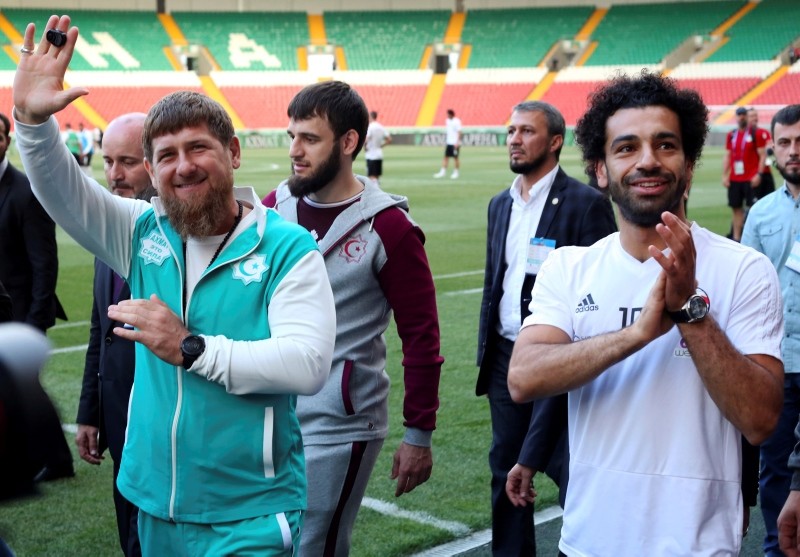 Mohamed Salah told Egypt team officials and teammates that he is considering retiring from international play because he is angry about being used as a political symbol while the World Cup squad was based in Chechnya, two people close to the player told The Associated Press Sunday.

Salah — the Muslim world's most popular soccer player today — said he was particularly annoyed with a team banquet hosted by Chechen leader Ramzan Kadyrov, who used the dinner to grant Salah "honorary citizenship," according to the two people. Both spoke on the condition of anonymity because of the sensitivity of the subject.

Egypt soccer federation spokesman Osama Ismail said that Salah has not complained to the federation. "Only what Salah writes on his Twitter account should be counted on."

Chechnya, a predominantly Muslim region in southern Russia, was devastated by wars between separatists and Russian forces. Kadyrov, a former rebel who switched his loyalties to Moscow, faces accusations of gross human rights violations, including abductions and killings.

Salah, who also took part in a photo opportunity with Kadyrov, has been criticized by the British media for allowing the Chechen leader to use him to improve the government's international image.

Salah had not responded publicly to the criticism while the team was based in Grozny, the Chechen capital. Salah's meetings with Kadyrov carry the potential to hurt his popularity in Europe, where he has been something of an ambassador for moderate Islam.

News of Salah's disapproval of Kadyrov's actions leaked out just after the Egyptian squad left Grozny. The team is now in Volgograd for Monday's game against Saudi Arabia which, like Egypt, has also been eliminated.

Salah will now turn his attention back to his club play. Last season, Salah led Liverpool to the Champions League final and was named player of the year in the Premier League after scoring 44 goals in all competitions.

If Salah were to quit the Pharaohs, it would be a major embarrassment to the federation and the government, which decided to base the team in Grozny. A populace that sees Salah as a hero would likely be furious, with the blame going to a government facing growing popular discontent over its decision to hike the price of fuel, drinking water and electricity.

Egypt coach Hector Cuper, was cagey when asked Sunday about Kadyrov's use of Salah to make political gains. He said FIFA listed Grozny as one of the cities that could be used as a World Cup training base.

Human Rights Watch and other groups unsuccessfully tried to persuade FIFA to drop Grozny from the list of possible team bases.

The banquet Friday night was held at Kadyrov's presidential palace in Grozny, and the Chechen leader posed with Salah for pictures while pinning a medal on his chest.

"It is a deserved honor," Kadyrov wrote on Russian social media, adding that Salah's presence had driven "unprecedented interest in football." Kadyrov said he wants Egypt to return to Chechnya after the World Cup for a friendly against local club Akhmat Grozny, which is named after Kadyrov's assassinated father.

A video clip of the ceremony showed Kadyrov seated at a table flanked by Salah and Hany Abo Rida, chairman of Egypt's football federation. Dancing troupes and singers performed for Kadyrov and his guests, with Salah grim-faced at times.