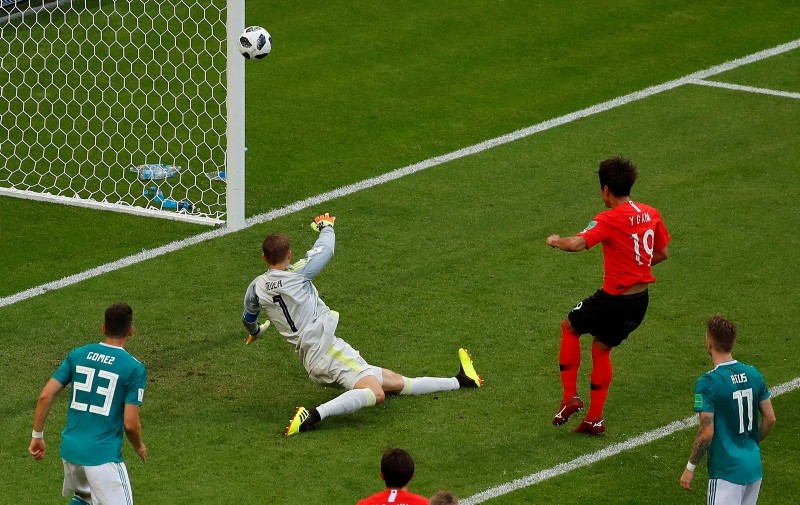 Defending champion Germany, whose World Cup stint was marked by racist attacks on its Turkish-origin players, was eliminated Wednesday from the competition after losing 2-0 to South Korea.

One of the favorites to triumph in Russia, Germany finished bottom in Group F after Sweden beat Mexico 3-0 in the other match to qualify for the last 16 along with its opponents.

Germany coach Joachim Loew, who has a contract until 2022, did not rule out resigning after the four-times champions became the fourth holders in the last five World Cups to go out in the group stage.

"It is too early for me to answer that question," he told ZDF.

"We need a couple of hours to see things clearly. The disappointment is deep inside me. I couldn't imagine that we would lose to South Korea."

Loew's side found it tough to break down South Korea's stubborn defence despite dominating possession at the Kazan Arena and were shocked by late goals from Kim Gwon Young and Son Heung Min, which were not enough to help their side through.

Kim stabbed home from close range in stoppage time but was initially flagged offside. The goal was given after an agonizing delay when the referee analysed it via the video assistant referee system and saw the last touch had come off a Germany player.

Then with Germany fragmented and desperate, Ju Se Jong robbed goalkeeper Manuel Neuer of the ball inside Korea's half and released Son, who ran through and rolled home.

However, late goals from Kim Young Gwon and Son Heung Min were not enough to help South Korea through either.

"There is huge disappointment. It is deathly quiet," Loew told reporters after the match, describing the atmosphere in the German dressing room.

Many have blamed the failure on a divided team that has been demoralized by recent acts of racism involving some of its players.

Germany's Mesut Özil and Ilkay Gündoğan, both of Turkish origin, experienced pressure and insult for weeks from German fans after posing with President Recep Tayyip Erdoğan during his visit to London last month. 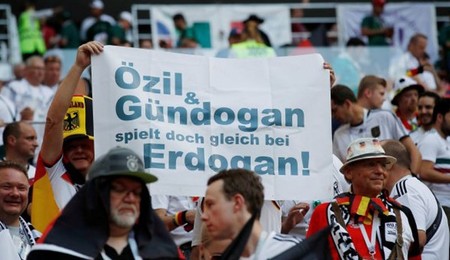 German police confirmed that Gündoğan filed a complaint against unknown persons after his car was vandalized during a friendly game on June 7 against Saudi Arabia.

Loew called on German fans to stop booing Özil and Gündoğan after the Premier League stars found themselves at the center of a political row.

"My job is to get both players, who have certainly suffered from this situation, in good shape," said the head coach on Wednesday at Germany's first press conference in Russia.

"It may be that these players will still be accompanied by whistles. So be it. I wish it were otherwise. My job is to get them in the flow to help the team."

As the attacks showed no sign of stopping, Loew then said he would be benching Özil and Gündoğan for their match against Sweden, citing their below-par performance.

Following the elimination of Germany, former Green Party Co-chair Cem Özdemir, known for his anti-Turkey stance despite his Turkish origins, blamed Erdoğan for the poor performances by attributing the players' meeting with the president as the main factor for the decreased moral of the Turkish-rooted players on the team. "They [Özil and Gündoğan] took photos with Erdoğan and this decreased the moral of the players. Erdoğan is responsible for Germany's elimination," Özdemir asserted.

However, Germany's defeat in the World Cup wasn't bad news for all.

Sweden, who was defeated by Germany last minute in the second round, took a jab at the Germans and wished them a pleasant trip back home on Twitter.

The shocking news also sparked celebrations among Turkish social media users, who welcomed their brother nation South Korea's victory. Normally, Turkish football fans would have supported Germany but this time were happy to see the Germans knocked out due to several racist attacks against the team's members of Turkish origin, as well as the coach's decision to exclude Mesut Özil and İlkay Gündoğan from their match against Sweden.

This is the first time Germany failed to make it through the opening round of the tournament since 1938, featuring in every edition between 1954 and 2018, marking its first exit in the World Cup group stages in 80 years.

It's also the third consecutive World Cup in which the holders have crashed out in the group stage.