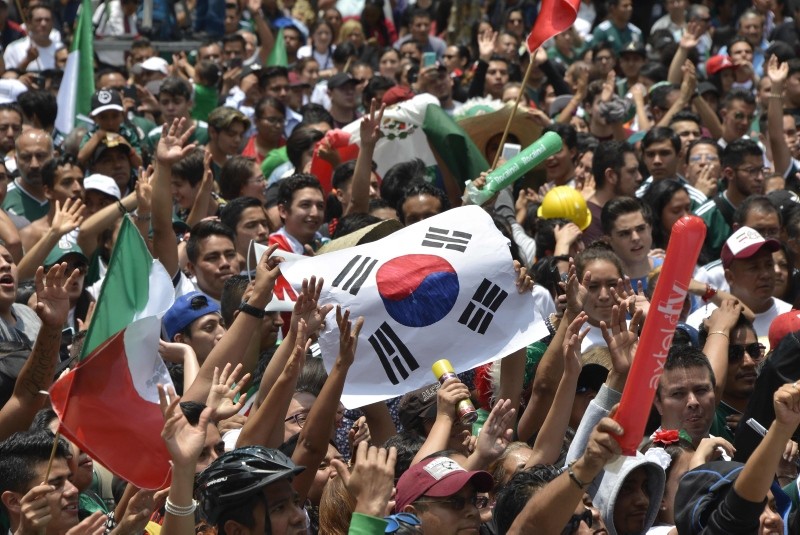 A football fan holds a flag of South Korea as thousands watch the World Cup match between Mexico and Sweden on a screen at the Angel de la Independencia Monument in Mexico City, June 27, 2018. (AFP Photo)
by Compiled from Wire Services Jun 28, 2018 12:00 am

Hundreds of Mexican football fans partied outside the South Korean embassy in Mexico City on Wednesday to thank the Asian country for its victory over Germany, which guaranteed the national team a spot in the knock-out stages of the World Cup.

After Sweden beat Mexico 3-0 on Wednesday, Mexican fans turned their support to South Korea, fearful that a victory by Germany would send their players home.

South Korea then stunned the world by defeating Germany 2-0 with two goals in the final minutes of the game.

"Korea! Korea!" chanted fans in a Mexico City bar, leaping into the air and embracing when the Asian side scored a stoppage-time, VAR-assisted goal, and then a late second to seal the reigning champions' humiliating exit — and allow Mexico to squeak through to the Round of 16, ensuring the former world champions were eliminated.

"I went from crying to laughing," said Cecilia Gonzalez, a 22-year-old student who was celebrating the outcome of the rollercoaster ride with tequila.

"Thank you Korea. I don't even know quite where it is, but thank you, thank you."

Though South Korea itself was knocked out, Mexicans flocked to the embassy to celebrate the Asian team.

"Thank you so much, [Koreans] are awesome. They are awesome," Gladys Ison, a 19-year-old Mexican said as she waved a South Korean flag outside the embassy.

Mexican airline Aeromexico announced a 20 percent discount on its Korean flights, saying: "We love you Korea!"

Traffic snarled around the embassy in the capital's upscale Lomas de Chapultepec neighborhood as jubilant fans leapt up and down, cheered and drank tequila, mobbing Korean diplomatic staff and singing Mexican football hymns.

The consul general at the embassy, Byoung-jin Han, said, "There's no distinction between Mexicans and Koreans today. We're celebrating together." Mexican staff at the embassy were crying with joy, he added.

Waving the flags of both countries and sporting sombreros, a loud group of fans partied on an old fire truck, honking its horn and pouring tequila off the roof into the open mouth of a local waiter who had come to join the celebrations.

Even fans of the Swedish team stopped off at the fiesta.

Johan Lindblom, 47, a Mexico City-based businessman originally from Stockholm wearing a Sweden shirt was relieved that both teams had progressed. "A final between Sweden and Mexico, that would be the ultimate," he said.

Celebrations spread to the historic center of the capital, where World Cup games are being shown on giant screens. Mexican fans mobbed Asian tourists, and TV footage showed one laughing Asian man being flung into the air and caught by the crowd.

Social media in Mexico instantly erupted into memes: a Mexican in cowboy hat and boots dancing to "Gangnam Style," a fake news headline on Mexico changing its official language to Korean, Twitter users vowing to start listening to K-pop and watch more Korean dramas on TV.

"Maybe it is not the best way of getting through, but we're through. We are very grateful," said Pablo Gonzalez, 45.