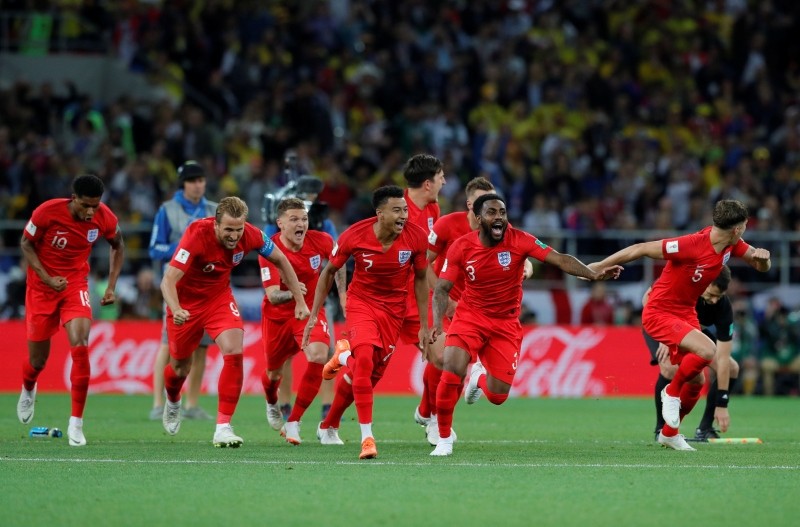 England's players celebrate after defeated Colombia in a penalty shoot out during the round of 16 match between Colombia and England at the 2018 soccer World Cup in the Spartak Stadium, in Moscow, Russia, Tuesday, July 3, 2018. (AP Photo)
by Compiled from Wire Services
Jul 03, 2018 12:00 am

England beat Colombia in a dramatic penalty shootout in Moscow on Tuesday to reach the World Cup quarterfinals.

England had looked on course for its first win in a knockout round of a tournament in 12 years when captain Harry Kane struck a well-taken penalty in the 57th minute.

But Colombia defender Yerry Mina snatched a dramatic stoppage-time equalizer with his third goal in three matches to force extra time which ended with the game level at 1-1.

Southgate's team is in the last eight for the first time since 2006. They play Sweden, who beat Switzerland 1-0 earlier Tuesday, on Saturday in Samara.

Colombia failed to make a second straight quarterfinal. They had most of the crowd support but also argued every decision of American referee Mark Geiger in an at times ill-tempered affair, with Carlos Barrios lucky not to be sent off as one of six Colombians booked.

Their coach Jose Pekerman had hoped that James would win a race against time after sustaining a calf bruise in the last group game against Senegal but eventually fielded three holding midfielders, and moved Jose Cuadrado behind lone forward Radamel Falcao.

Southgate brought back all those he rested in his last group game against Belgium, including Kane, making nine changes and fielding the same starting 11 as in the opening 2-1 over Tunisia.

The first real threat came in the 16th but Kieran Trippier's cross from the right to Kane was just a little too high as the captain only managed to head the ball back onto the roof of the net.

With James watching on in the first row, Colombia gained more control but managed no more than an attempt from the distance by Johan Mojica which went way high.

Tottenham's Trippier then fired wide left on a free-kick which took forever to be carried out as Geiger argued with the Colombian wall and Barrios was strangely only booked for head-butting Henderson during all the jostling for positions.

Shortly after the restart Sanchez was then all over Kane which led to the penalty. More debating made Kane wait for several minutes before he calmly hit into the middle of the net with Ospina diving to his right - their ninth goal in Russia and seventh from a set piece.

England had several chances to double the lead but Colombia then hit back at the death.

Jonathan Pickford kept out a belter from substitute Mateus Uribe but Mina rose to nod in the ensuing corner kick three minutes into the five added on, his third goal of the tournament.

Colombia suddenly looked fresher against a stunned and tired England in extra time, with Falcao heading wide in the 104th. Dier then headed high in the 114th but made amends a little later in the shoot-out.