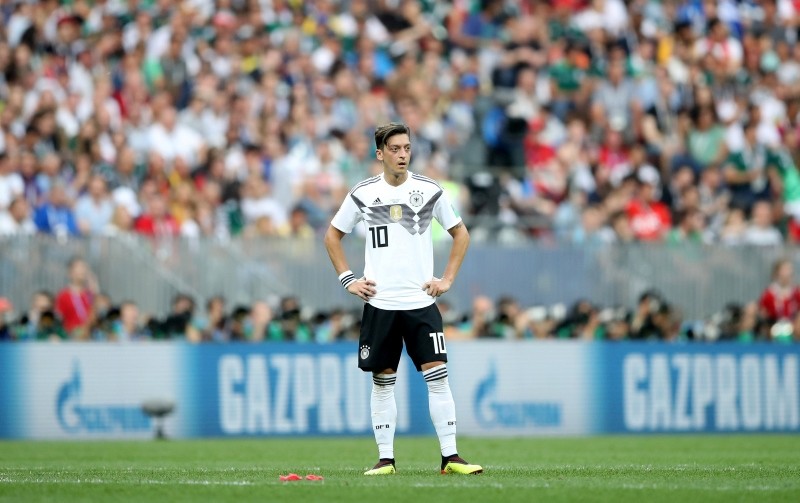 The father of Mesut Özil said Sunday his son should quit Germany's national squad after he was "made the scapegoat" for Die Mannschaft's embarrassing first-round elimination at the World Cup.

Özil, 29, has come in for hefty criticism in Germany after the World Champions crashed out in Russia, finishing bottom of their group.

Pressure had already been mounting on the Arsenal midfielder as well as his Germany teammate Ilkay Gündoğan, also of Turkish origin, in the World Cup run-up over a meeting with President Recep Tayyip Erdoğan that was seized on to question his loyalty to Germany.

The two players experienced insult and racial attacks for weeks from German fans and assaults reached a point where Gündoğan's car was vandalized in the German city of Cologne.

Gündoğan responded at the time with a statement, explaining his position and saying it was not his intention to create a political issue with the photo. Özil, however, has never commented on the issue even after meeting German President Frank-Walter Steinmeier, and stayed away from a media day in the team's pre-tournament training camp in Italy.

On Thursday, Germany's team boss Oliver Bierhoff sparked a new round of outcry over a statement suggesting Özil should have been dropped after his failure to publicly clear up the Erdoğan meeting.

"This statement is insolent. In my opinion, it is aimed at saving one's own skin," said the mid-fielder's father Mustafa Özil in an interview with Bild am Sonntag.

Bierhoff later backtracked, apologizing that he "was wrong."

Özil senior said he believed his son had agreed to have a photograph taken with Erdoğan only out of "politeness" and that it was never meant to be a political statement.

He also defended Özil for not having spoken out to clarify his position.

"He no longer wants to explain himself, he no longer wants to have to defend himself all the time. He has been playing for nine years in the German team... including becoming world champions with the A-team. He has contributed a lot for this country. It has always been: if we win, we win together," the midfielder's father said.

"But when we lose, we lose because of Özil? He is now getting whistled at and made a scapegoat. I can understand if he feels insulted."

Calling the treatment accorded to his son "so unfair," Özil senior said "he needs to decide for himself. But if I were in his place, I'd say — thanks a lot but that's it!"

"The hurt has grown too strong. And who knows what'll happen at the next match. In Mesut's place, I would step down. But that's just my very personal opinion," he said.