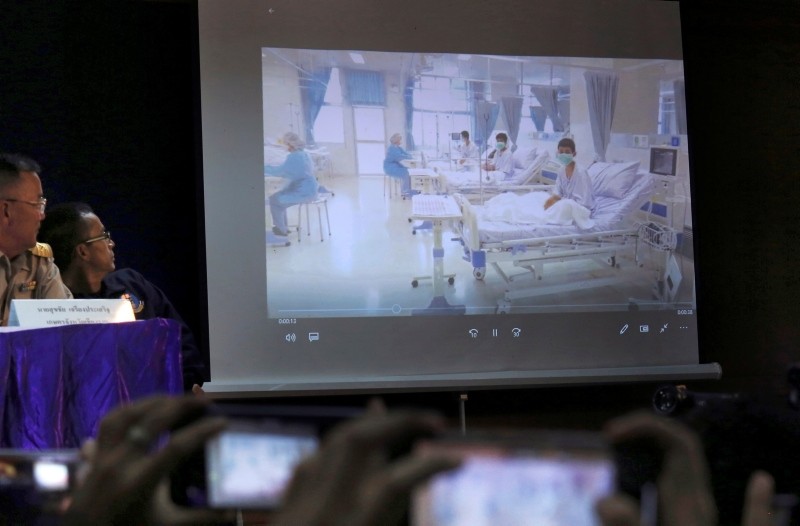 Members the media try to photograph a projected image of the rescued boys in their hospital room during a police press conference in Chiang Rai province, northern Thailand, Wednesday, July 11, 2018. (AP Photo)
by Compiled from Wire Services
Jul 11, 2018 12:00 am

The members of the schoolboy team rescued from a flooded cave in northern Thailand have been hailed as "heroes" by the world of football after their dramatic ordeal.

From FIFA to Paul Pogba and from Manchester United to Barcelona, masses around the world breathed a sigh of relief after the Wild Boars team finally emerged after more than two weeks trapped underground.

FIFA said it invited the boys to the World Cup final on July 15 in Moscow.

However, the football governing body had been informed "that due to medical reasons, the boys will not be in a position to travel to Moscow."

"FIFA's priority remains the health of everyone involved in the operation and we will look into finding a new opportunity to invite the boys to a FIFA event to share with them a moment of communion and celebration," a FIFA spokesman said.

Spanish giants Barcelona invited the kids and their coach "to the Barça Academy International Tournament next year and to participate in Masia 360 activities."

"We also invite them to the game to be played around those dates at the Camp Nou," the club said in a tweet.

Both the team and their rescuers could also be in line for a trip to Old Trafford after English Premier League runner-up Manchester United invited them to their home ground this season.

"#MUFC is relieved to learn that the 12 footballers and their coach trapped in a cave in Thailand are now safe," the club tweeted.

"Our thoughts and prayers are with those affected. We would love to welcome the team from Wild Boars Football Club and their rescuers to Old Trafford this coming season."

Portuguese club Benfica's president Luis Filipe Vieira wrote to the Thai ambassador to Portugal to also invite the boys to the camp in Seixal across the River Tagus from the capital, a club statement said.

"We believe this simple gesture can help these faces recover the joy and smiles that no child should ever lose," Vieira said in the letter.

In a sign of how their plight had gripped players at the ongoing World Cup in Russia, Paul Pogba dedicated France's semifinal win against Belgium to the youngsters.

"This victory goes to the heroes of the day, well done boys, you are so strong," the Manchester United midfielder tweeted after Tuesday's 1-0 win.

England defender Kyle Walker, ahead of Wednesday's semi-final against Croatia, also welcomed the news and offered to send them football shirts.

"Amazing news that all of the Thai kids are out of the cave safely! I'd like to send out shirts to them! Is there anyone who can help with an address?" he tweeted.

The 12 boys, aged 11-16, and their 25-year-old coach became trapped by rising floodwaters after setting off to explore a cave complex in northern Thailand after football training on June 23.

The last of the group was finally extracted on Tuesday, 18 days later, after a painstaking and dangerous international rescue mission led by Thai Navy SEALs.

Rescuers had weighed up several options to save the boys, including keeping them in the cave through the months-long monsoon season.

But they were prodded into the dangerous task of "diving out" the team through submerged chambers and claustrophobic passages as oxygen levels in the cave plummeted and rains menaced.

The group were led out in three batches by a team of 13 international divers flanked by the Thai Navy SEALs, who greeted each successful rescue with a "Hooyah" on their Facebook page.

Earlier, Japan's World Cup squad, Liverpool manager Jurgen Klopp and Croatia's football federation were among those to send messages of support during the boys' ordeal.