Turkish referee Çakır to officiate semifinal between Croatia and England 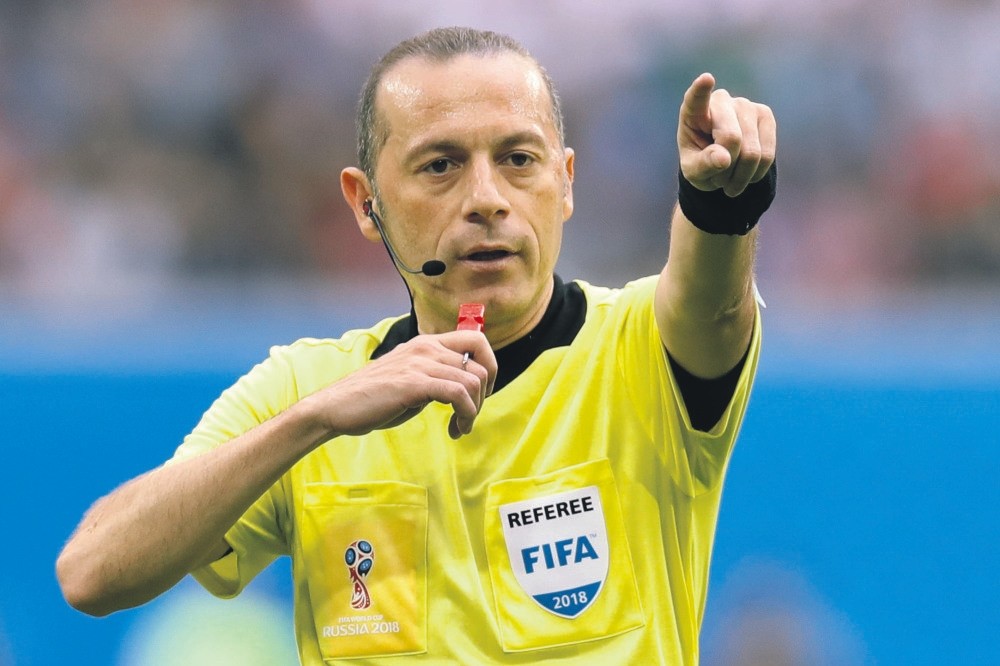 Neither Croatia nor England are short of belief ahead of today's World Cup semifinal that Turkish referee Cüneyt Çakır will oversee. Croatia is seeking to reach a first final, while England is out to emulate the country's 1966 winners

Croatia needs to recover from two energy-sapping extra-time games and penalty shoot-outs to defeat England and reach their first World Cup final. England meanwhile is seeking to reach a first final since their only title win at Wembley in 1966 in today's second semifinal at Moscow's Luzhniki Stadium - also the venue for Sunday's final. FIFA announced Monday that Cüneyt Çakır will be making the calls at the match at the Luzhniki Stadium. The fourth official for the Croatia-England match will be Dutchman Bjorn Kuipers, who officiated England's quarterfinal victory over Sweden. England vs. Croatia will be 41-year-old Çakır's third match in Russia 2018. He previously refereed Iran's 1-0 victory over Morocco and Argentina's thrilling 2-1 win over Nigeria.

England has not appeared in a World Cup last four since going out to West Germany in a penalty shoot-out at Italia 90, while Croatia have matched the team of 1998, who reached the semifinals on the nation's World Cup debut following independence in 1991. Croatia shone in the group phase, beating Nigeria 2-0 and Argentina 3-0 to make sure of progress to the last 16, allowing them to make nine changes for a 2-1 defeat of Iceland. For many, they were among the title favorites at that stage, but penalties have since been needed to get past Denmark and hosts Russia.

"In the past six days, we have spent a lot of energy. We played two games, totalling 240 minutes, and it certainly will be a problem," coach Zlatko Dalic said.

"We will do everything to recover and I'm sure we will find energy for England."

England manager Gareth Southgate has spoken of how penalty shoot-outs can be emotionally draining, but Croatia striker Mario Mandzukic does not not feel the team will be tired.

"We have waited for several years for this with Croatia. It is very near and we will leave our last drop of sweat on the pitch to achieve our goal," he said. England also made sure of early progress from the group stage after beating Tunisia 2-1 and Panama 6-1, allowing Southgate to rest players in the 1-0 defeat to Belgium. England then overcame Colombia in a penalty shoot-out before defeating Sweden 2-0, and have the tournament's leading scorer in Harry Kane, who will now be closely watched by Liverpool centre-back Dejan Lovren.

"Every honor to Kane, he scored six goals, but we managed to stop (Lionel) Messi (of Argentina) and (Christian) Eriksen (of Denmark), and I hope we will also stop Kane as well," Dalic said. Croatia may feel they have the edge in midfield, where Real Madrid's Luka Modric and Barcelona's Ivan Rakitic can expect to see much of the ball.

"We have strength and we're united on the pitch. Like one heart, one soul," Rakitic said.

Modric said: "We expect a very difficult, tight and demanding match against England. Every match at this World Cup is such."

England has looked strong at set pieces - eight of their 11 goals have come from set plays, including three penalties - and will have noticed that Croatia conceded from a free-kick in extra-time against Russia. The two teams last played in September 2009, when England defeated Croatia 5-1 in a World Cup qualifier.