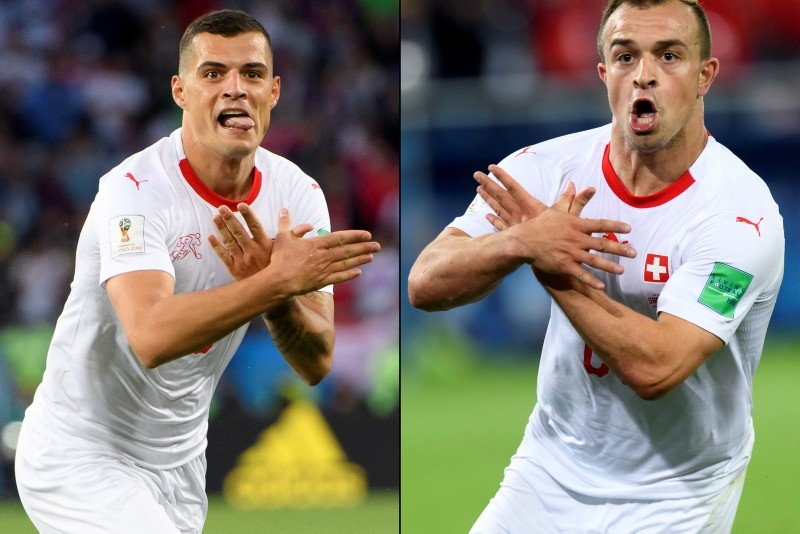 A combo picture shows Switzerland's Granit Xhaka, left, and Xherdan Shaqiri celebrate their World Cup 2018 goals against Serbia by forming an eagle with their hands at the Arena Baltika Stadium in Kaliningrad, Russia, June 22, 2018. (EPA Photo)
by Jul 13, 2018 12:00 am

The controversy started when Swiss players Granit Xhaka and Xherdan Shaqiri celebrated their respective goals against Serbia by forming an eagle with their hands — a symbol that highlighted their Kosovo-Albanian roots and taunted the opposing Serbian fans.

After Switzerland had exited the tournament in the round of 16, and after global football body FIFA had fined the players for their gestures, SFV secretary-general Alexander Miescher posed the question "Do we need dual nationals?" in a newspaper interview.

"It sounds to me like he doesn't believe that dual nationals go to the limit for Switzerland," Xhaka shot back, criticizing Miescher's "stone-age comments."

At least half of the Swiss internationals have two passports or are descendants of immigrants, the Arsenal midfielder added.

"We are extremely sorry that dual nationals have felt discredited and not accepted by the SFV secretary general's interview," Gillieron said.

He stressed that the integration of migrants is a basic principle of the Swiss football body, and he added that "roles and responsibilities" within the SFV will be reviewed.