As the World Cup 2018 ends, it has both good and bad sides 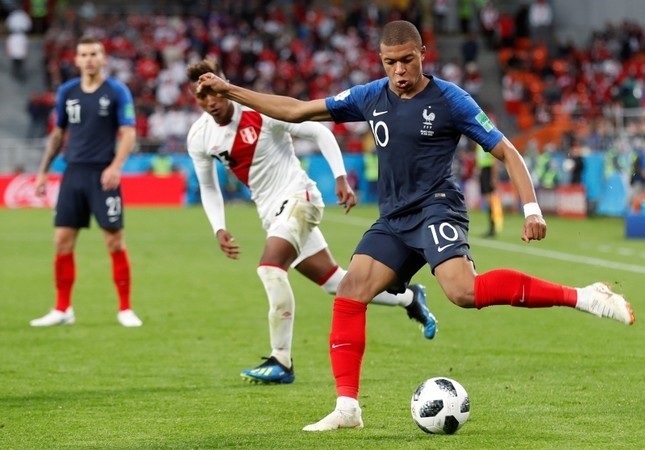 Kylian Mbappu00e9 of France in action during the FIFA World Cup 2018 group C preliminary round soccer match between France and Peru in Ekaterinburg, Russia, 21 June 2018. (EPA Photo)
by Compiled from Wire Services
Jul 14, 2018 12:00 am

With Sunday's final pitting France against Croatia, the World Cup in Russia has provided plenty of memories from both ends of the football spectrum

FIFA president Gianni Infantino celebrated what he described as the "best World Cup" ever on Friday, thanks to the quality of football and organisation in Russia. However, the World Cup in Russia has provided the perfect stage for the best and the worst of the global game.

NEWCOMERS: Iceland and Panama did not survive the group stage but the enthusiasm of the tournament debutants and their fans was a welcome addition to the World Cup.

FAIR PLAY: Only four players have been sent off in the 62 matches played so far. Germany's Jerome Boateng and Russia's Igor Smolnikov walked for second bookable offences. and Switzerland's Michael Lang and Colombia's Carlos Sanchez were shown straight red cards.

VAR: There was plenty of scepticism around the debut of VAR but it was a helpful and accepted new tool with few flaws.

RACISM: Germany's Mesut Özil was targeted by right-wing comedians and politicians after the team's early exit. He was born and raised in Germany but has Turkish heritage. He was criticized for posing for a photograph with President Recep Tayyip Erdoğan. Sweden's Jimmy Durmaz, also of Turkish heritage, received racist threats online after his foul allowed Germany to score a late winner against Sweden.

DIVER: Neymar scored two goals for Brazil but their star player got more headlines for diving and play-acting than for his football. His changing haircut was ridiculed in social media, and Spanish paper Mundo Deportivo shrugged him off as "Neymal" - "mal" meaning "bad" in Spanish.

GERMANY: Germany managed a lucky stoppage-time win against Sweden but defeats against Mexico and South Korea meant they became the third straight reigning champions to bow out in the group stage. Coach Joachim Loew kept his job but doubts remain over both his capacity to take the team forward and the German Football Federation's faith in him. COMPILED FROM WIRES