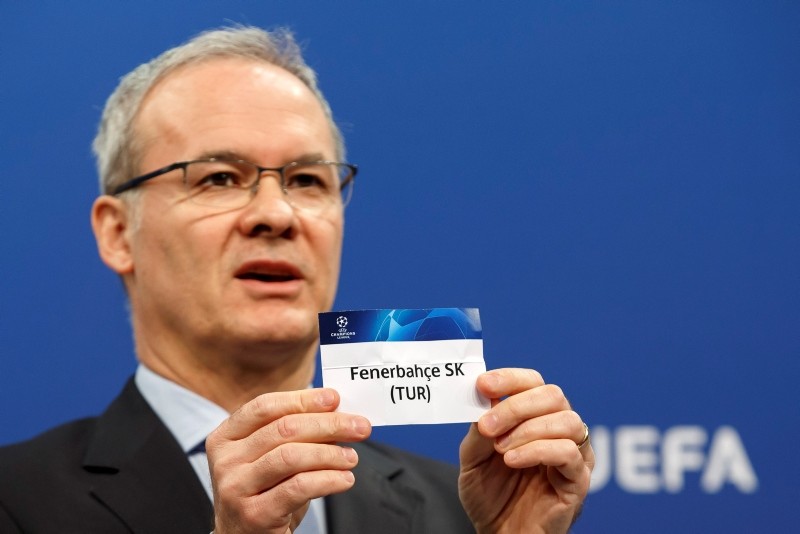 UEFA Deputy Secretary-General Giorgio Marchetti shows a ticket of Fenerbahu00e7e during the drawing of the fixtures for the Champions League 2018/19 third qualifying round at the UEFA headquarters in Nyon, Switzerland, July 23, 2018. (AFP Photo)
by Compiled from Wire Services
Jul 23, 2018 12:00 am

The pairing will likely revive bad memories for the Istanbul-based club which saw its worst defeat in European football competitions against Benfica with a 7-0 loss in the 1975-76 season. Fenerbahçe, on the other hand, made tangible progress in UEFA games since then and counts on a new coach and an administration promising sweeping changes to the team.

"Benfica is not pleased with the result of the draw too," Fenerbahçe's French director of football Damien Comolli, told Anadolu Agency (AA) afterward. "It is going to be a tough challenge. Two good teams will face each other."

"They are a strong team with great fans and a beautiful stadium. They narrowly missed championship last season [in local league]," he said.

Comolli said he is counting on the advantage of playing home in the second match.

"Support of our fans can make a big difference," he added.

Fenerbahçe is looking to reinvent its image as a leading power in Turkish football after electing Ali Koç as president last month. He is the club's first chairman after a two-decade stint of Aziz Yıldırım, a tumultuous period marked with scandals. Koç brought in Comolli and Philip Cocu, a former Barcelona midfielder who took the reins as the team's new manager.

The last time Fenerbahçe and Benfica were paired against each other was back in 2012-13 in the UEFA Europa League semifinals. Benfica had eliminated Fenerbahçe to advance to the finals.

Like Fenerbahçe, which wrapped up their domestic league last season in second place, Benfica boasted an impressive season of their own with 25 wins and six draws. The Portuguese side has two European Champion Clubs' Cups under its belt, before that competition was replaced with the UEFA Champions League contest. At home, the team has secured 36 top league titles.

In the first leg of its Champion Clubs' Cup matches against Fenerbahçe in the 1975-76 season, Benfica devastated the Istanbul club with a 7-0 score, dashing the hopes of Fenerbahçe in Europe despite a 1-0 comeback in the second leg.

As runner-up in the Portuguese league last season, Benfica fell into the qualifying rounds because Russia's league is now ranked more highly and has three entries.

Spartak Moscow, which placed third in Russia last season, was drawn yesterday to play PAOK Thessaloniki or Basel, which play their second qualifying round games this week and next. Four-time European champion Ajax must beat Sturm Graz to play Standard Liege in the third qualifying round. Also, Celtic or Rosenborg will take on AEK Athens, and Slavia Prague meets Dynamo Kiev. Winners advance to the Champions League playoff round.

Meanwhile, draws in the UEFA Europa League's third qualifying round were also held Monday in Nyon.

Beşiktaş is set to play B36 Torshavn in the second round and should it beat its opponent from the Faroe Islands the Istanbul giants will face the winner of a tie between LASK and Lillestrom.

Medipol Başakşehir will meet either Aberdeen or Burnley.

First matches in the third qualifying round will be held Aug. 9, while the second-leg matches will be played Aug. 16.

After the third qualifying round, teams will be paired off one more time in the playoff round for the right to compete in the group stages.