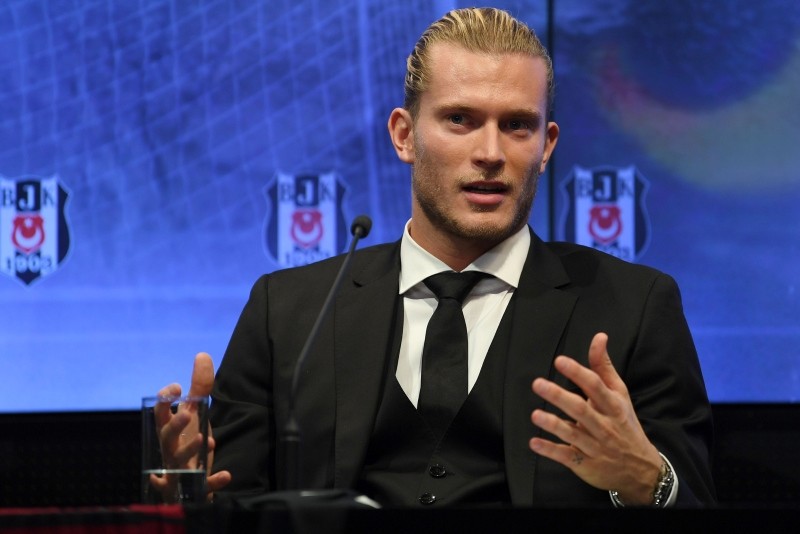 German goalkeeper Loris Karius gestures as he delivers speech during a press conference for his presentation at the Vodafone Park Stadium, on August 29, 2018, in Istanbul. (AFP Photo)
by Aug 29, 2018 12:00 am

Former Liverpool goalkeeper Loris Karius on Wednesday said his loan to Turkish side Beşiktaş was the right move for the next step in his career after his errors cost the Premiership team the Champions League final.

"It is a great group of players and I am very excited and honored to play for a club with such a tradition and amazing fans," the German said in his first comments since joining the Istanbul club on a two-year loan deal.

"I came here as I think I can make the next step in my career and improve," said the 25-year-old, who has yet to break through into the German international side.

"I am still young for a goalkeeper and looking for the next step in my career," he added.

Karius lost his Liverpool first team place in the wake of his traumatic performance in the Champions League final, when two glaring errors handed Real Madrid a 3-1 victory.

"He told me he would like to have me in squad but I asked him for my wish and that it's important for me to leave," said Karius.

"I talked a long time. He understands my situation. I think it was a good idea for everyone and he wished me well."

He played down the nightmare of the Champions League final, saying: "This is life, this is football, mistakes happen to any player... It was an unlucky day but that's football."

He also passed his best wishes to his former Liverpool teammate and Belgian international goalkeeper Simon Mignolet who appears destined to spend the season as understudy to Alisson.

Mignolet had been quoted as saying in Belgian media it was "bizarre" that Karius had been allowed to leave while he had to stay at Liverpool without first team football.

"If you look at it from a neutral perspective, then Liverpool looks at what is best for the club. There must have been a reason," said Karius.

"I hope he (Mignolet) still has a good season there," he added.

Beşiktaş, whose former first choice goalkeeper Fabri left in the summer for Fulham, won the Turkish title two seasons in a row but their run was ended last season by Istanbul rivals Galatasaray.

The club on Thursday faces a crucial home Europa League play-off home to Partizan, with the score 1-1 after the first leg.