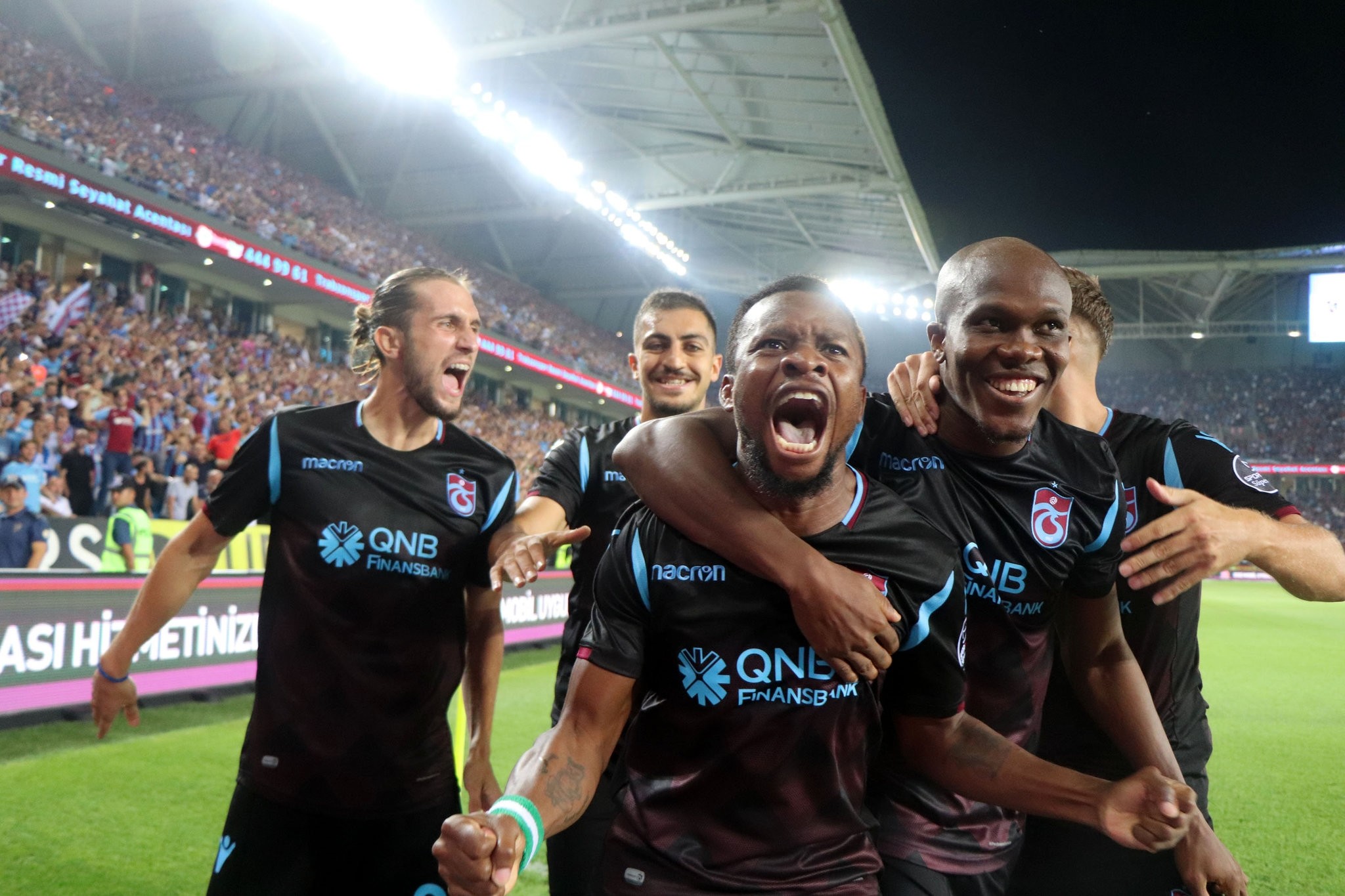 Trabzonspor players celebrate 4-0 win against Galatasaray on Saturday in front of their fans.
by Daily Sabah with AA Sep 03, 2018 12:00 am

Istanbul powerhouses Fenerbahçe and Galatasaray both suffered shocking defeats against their rivals in different ways in the Super League's third week.

Fenerbahçe upset fans after losing its third consecutive match, making it their worst start in its 61-year Super League history. The match between Fenerbahçe and Kayserispor at Ülker Stadium in Istanbul saw the former defeated 2-3.

The host club Fenerbahçe was leading 1-0 after Andre Ayew scored the first goal in the 13th minute of the match. However, Kayserispor managed to equalize at 1-1 in the 52nd minute thanks to midfielder Bernard Mensah. Islam Slimani scored the second goal for Fenerbahçe in the 57th minute. But Kayserispor brought the score to 2-2 when Fenerbahçe's Martin Skrtel scored an own goal in the 61st minute. The guest team got 3 points after Tjaronn Chery scored the third goal at the 69th minute. Kayserispor's Samil Cinaz was brandished a red card by the referee in the 82nd minute.

Fenerbahçe's coach Philip Cocu said after the game, "The bad results can't have anything to do with the changes in the club. There is no excuse for defeats. We could not respond to our fans' support. We will overcome this bad situation by fighting."

Meanwhile, Galatasaray stunned supporters, and all Turkish football fans, because the reigning champs who won three straight matches to kick-off the 2018-19 season, got thrashed 4-0 against their Anatolian rival Trabzonspor on Sunday at Medical Park Stadium in northern Trabzon province.

Trabzonspor's first goal came in the 3rd minute by Ogenyi Onazi. Anthony Nwakaeme scored the next two goals for the team in the 25th minute and another one right before the first half whistle blew. The team's demoralizing fourth goal came by Caleb Ekuban in the 92nd minute.

As for the other matches in the fourth week, Atiker Konyaspor defeated Evkur Yeni Malatyaspor 1-0, Aytemiz Alanyaspor edged out Göztepe 1-0, while Akhisarspor drew Demir Grup Sivaspor 1-1.

Meanwhile, Tolga Ciğerci, who recently parted ways with Galatasaray, joined Fenerbahçe. Fenerbahçe said on its website that they signed a 1+1 agreement with the 26-year-old midfielder.

On Wednesday, Galatasaray and Tolga Ciğerci mutually terminated their agreement. In 2016-17 season, Galatasaray signed a three-year contract with Ciğerci, who then played for Germany's Hertha Berlin.