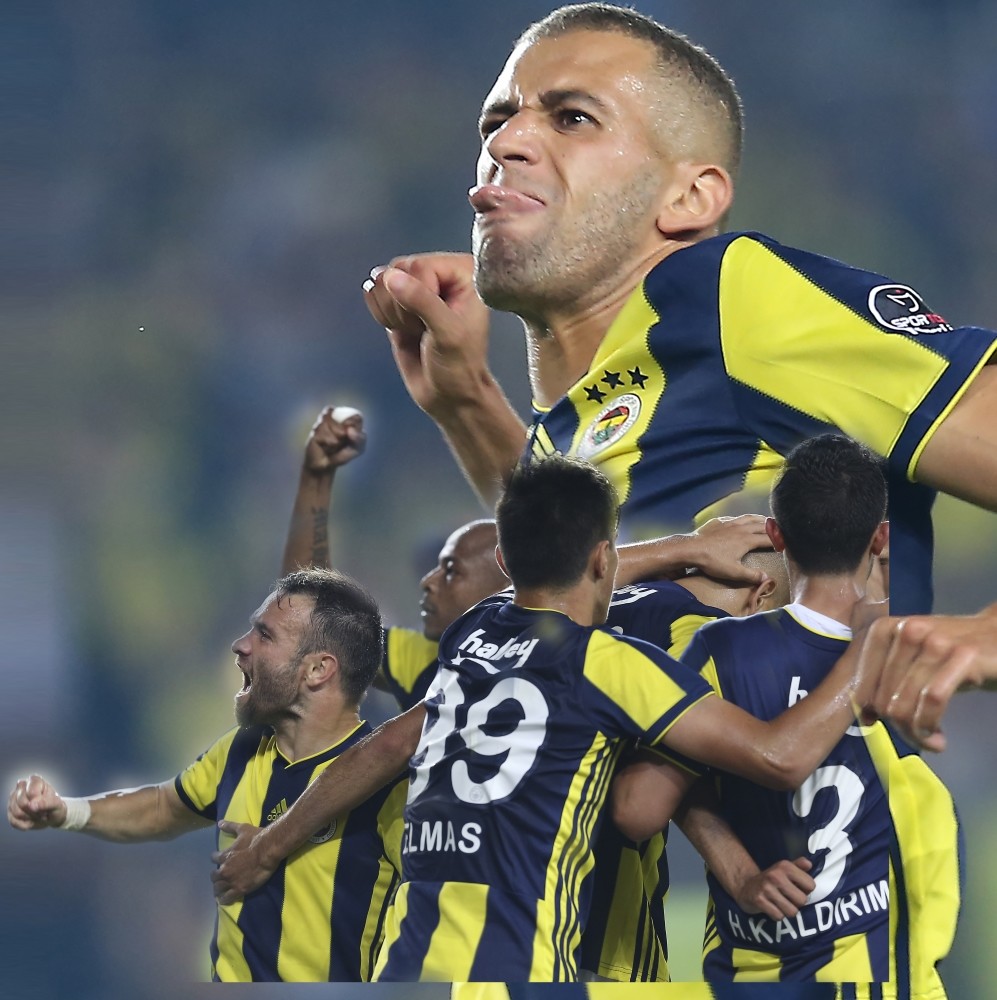 After consecutive losses both in the Super League and in Europe, Fenerbahçe finally sighed a breath of relief with a 2-0 win in the Europa League against Spartak Trnava. Conversely, Beşiktaş and Akhisar returned from their away matches empty-handed

After the worst start to a season in recent memory, Fenerbahçe bounced back on Thursday with a 2-0 win against Spartak Trnava in its second UEFA Europa League group stages match.

A brace from Algerian winger Islam Slimani against the Slovakian team gave the Yellow Canaries their first win in the Europa League. The Group D match at Şükrü Saraçoğlu Stadium saw a possession-dominating Fenerbahçe side, although they were unable to break the deadlock in the first half despite forcing their opponents to defend throughout.

The Yellow Canaries ended the stalemate in the 52nd minute when Trnava's goalkeeper Martin Chudy could not clear the ball in the six-yard box and Slimani used the opportunity to score from close range. Fenerbahçe increased its lead to 2-0 in the 68th minute when Slimani scored a header off of Andre Ayew's cross from the left wing.

In the other Group D match, Dinamo Zagreb beat Anderlecht 2-0 in Belgium to continue to lead the group.

The Yellow Canaries have lost four of their seven opening matches in the Spor Toto Super League and were thrashed 4-1 by Dinamo Zagreb in their first UEFA Europa League match this season. After a number of consecutive defeats, Fenerbahçe were desperately looking for a win against Trnava.

The match was also a matter of survival for Fenerbahçe's Dutch coach Philip Cocu. According to Turkish media reports, Fenerbahçe has been negotiating with several coaches. The Istanbul team remains only two points clear of relegation in the Super League.

In the Group I away match, Malmö right-back Andreas Vindheim scored in the 51st minute as he whipped in a ball from the right touchline that appeared to deflect off Beşiktaş's Caner Erkin and snuck into Loris Karius' net. The Swedish side expanded its lead in the 76th minute as Markus Rosenberg scored from the penalty spot, with the match ending 2-0.

In the other Group I match, Sarpsborg defeated Genk 3-1. Malmö had lost the opener 2-0 at Genk while Beşiktaş had defeated Sarpsborg 3-1 in their first match in the group.

Akhisar was also defeated by Belgium's Standard Liege 2-1 Thursday in their second match of the Europa League 2018-19 group stage.

In Group J, Standard Liege midfielder Mehdi Carcela's corner from the left met the head of teammate Renaud Emond, who bounced a header past Akhisar's goalkeeper Fatih Öztürk to open the scoring in the match.

Akhisar scored their first European league goal in the 32nd minute of the away match when Standard Liege goalkeeper Guillermo Ochoa managed to save Yevhen Selezynov's header but could not hold on to the ball and Onur Ayık poked in the rebound. But Standard Liege moved ahead again as Moussa Djenepo scored a goal in the 40th minute, with the first half ending 2-1.

The Turkish side was down to 10 men after Akhisar's Mustafa Yumlu received a second yellow card and was sent off in the 82nd minute. Akhisar lost 1-0 to Russia's Krasnodar in their UEFA Europa League debut while Standard Liege was beaten 5-1 at Sevilla in their first match in the group.

In the other Group J match, Krasnodar beat Sevilla 2-1.

Elsewhere, Arsenal cruised to a 3-0 win at Qarabag in Europa League Group E on Thursday, while AC Milan saw off Olympiakos 3-1 to take control of Group F.

In Group A, Bayer Leverkusen beat AEK Larnaca 4-2, while Zurich edged Ludogorets 1-0. Celtic stumbled to a 3-1 defeat against leaders Salzburg in Group B, continuing a disastrous start to the season, while RB Leipzig beat Rosenborg 3-1 to go level with the Scottish side on three points.

FC Copenhagen won 2-1 at Bordeaux and Zenit St. Petersburg beat Slavia Prague 1-0 in Group C, with the two victors level on four points at the top.