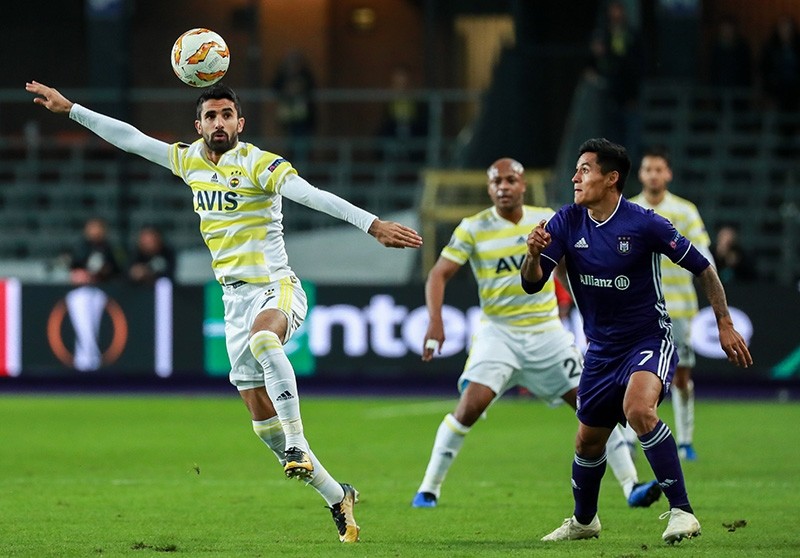 Alper Potuk of Fenerbahu00e7e (L) and Andy Najar of Anderlecht in action during the UEFA Europa League match at the Constant Vanden Stock stadium in Anderlecht, Belgium, Oct. 25,2018. (EPA Photo)
by Daily Sabah Oct 25, 2018 12:00 am

Under pressure at home, Fenerbahçe put on an inspiring performance Thursday to overcame a two-goal deficit and salvage a point against Anderlecht in the Europa League.

The Canaries had won their first match 2-0 against Slovakia's Spartak Trnava.

For its UEFA Europa League Group D match on Thursday, Fenerbahçe traveled to Brussels. At the Constant Vanden Stock Stadium, Anderlecht's Zakaria Bakkali scored in the 35th and 50th minute to put his team in control.

Fenerbahçe, however, bounced back in the 53rd minute through Michael Frey and Hasan Ali Kaldırım made it all square in the 57th minute.

In the other Group D match, Croatia's Dinamo Zagreb beat Spartak Trnava 2-1 to maintain its lead in the group.

Fenerbahçe's pressured coach Phillip Cocu said he was pleased with the way his club salvaged a point and hoped the team will draw strength and confidence from the match in Brussels.

"I have a good feeling, we stayed alive in the match thanks to Michael's goal, then Hasan scored a great goal out of a brilliant combination. I had the feeling that it would end 2-3," Cocu told FOX Sports.

"That would have been a fantastic comeback, but at least this makes for a good feeling in the team. We are in a difficult phase, but in a European away game we still have a 2-0 deficit," he said.

Cocu has had a very difficult start at Fenerbahçe but is confident that he can turn the situation around in Istanbul.

On Sunday, Fenerbahçe will face mid-table Ankaragücü at home in the Turkish League before getting ready for the Istanbul derby against archrivals Galatasaray in the week after.

"This result should give us a back-up for the weekend," said Cocu. "We also scored, something we have had trouble with over the last few weeks, and I am satisfied with that."

Fenerbahçe, who could not qualify for the Champions League this season, is currently second in Europa League Group D.

It has four points from three matches and is behind still flawless Dinamo Zagreb, who has full nine points from the same number of outing. Spartak Trnava has three while Anderlecht has just one.

Meanwhile, for Beşiktaş and Akhisarspor, the other Turkish teams in the Europa League, it was a night to forget.

Beşiktaş was beaten 2-4 by Belgium's Genk in Istanbul while Spanish side Sevilla gave Akhisarspor a 6-0 drubbing.