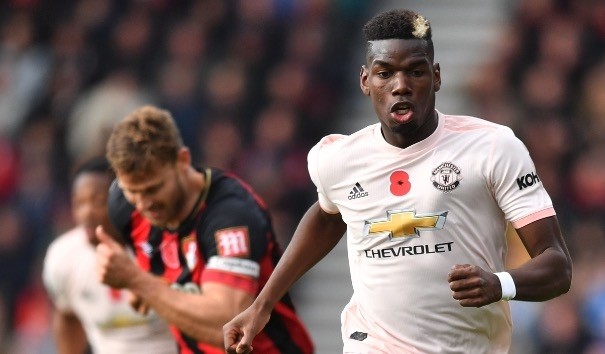 Manchester United's Pogba (L) will play against his idol Juventus star Ronaldo today.
by Compiled from Wire Services Nov 07, 2018 12:00 am

Champions League Round 4 is coming to a close today and several former winners look set to advance. Ajax and Bayern Munich are some of the previous winners who can secure their passage into the knockout stage of the Champions League today – with two games to spare. Manchester City and Juventus can also progress while Santiago Solari and Thierry Henry make their coaching debuts in Europe's elite competition on matchday four. Real Madrid is still without Marcelo, Dani Carvajal, Mariano Diaz and Raphael Varane as they face Viktoria Plzen in the third game under new coach Solari today. He must decide whether to drop Gareth Bale, who has been taken off in the last two matches and whistled at by fans.

"The supporters express how they feel in the moment," Solari said. "If he scores goals for us this week the same supporters will celebrate them." Real tops Group H on six points, alongside Roma who visits CSKA Moscow (four) with Plzen on one.

The Romans won their home game 3-0 against the Russians but are now without captain Daniele De Rossi and winger Diego Perotti. Bayern can progress from Group E with a win against AEK Athens if Benfica loses to Ajax – a result which would send the Dutch through.

"Our job is to stand our ground and not hide away," said Thomas Mueller. "We now have two important games, it won't help us to argue or hesitate."

Perfect Group H leader Juventus is one point away from qualification and would secure first place by beating Manchester United again after edging them 1-0 at Old Trafford.

"In Manchester, we played a great game, but once again we didn't close it out how we should have," midfielder Miralem Miralem Pjanic said. United are on four points and will watch anxiously as Valencia (two) and Young Boys (one) attempt to skip them from the other game.

"I think we started the game against Juventus a bit in awe," United defender Chris Smalling said. "But we showed in the second half we could give them a game."

Manchester City manager Pep Guardiola insists his team can play better despite warming up for their Group F match with Shakhtar Donetsk by thumping Southampton.

"We can improve and that is good," Guardiola said. "I like to have that feeling that we won 6-1 and are top of the table, we fought until the last minute but at the same time we have to improve in many situations to be a more stable team. City, without injured Kevin De Bruyne, will progress with a home win if Hoffenheim loses away to Lyon.