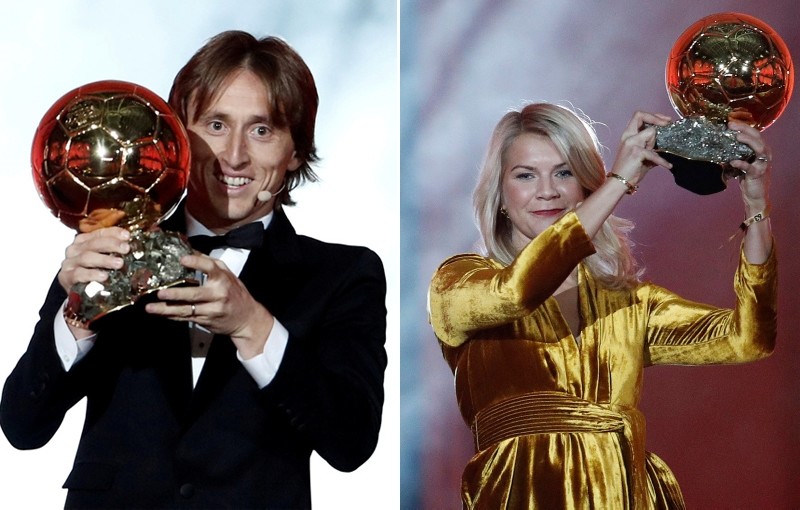 Modric, 33, helped Real Madrid win a third successive Champions League title in May and also captained Croatia to their first World Cup final, being named player of the tournament despite his side losing 4-2 to France.

"It's a unique feeling. I'm happy proud and honoured, I have a lot of emotions right now, it's hard to describe in words," said Modric, wearing a tuxedo as he collected the award from presenter and former France forward David Ginola after a glamorous ceremony at the Grand Palais in Paris.

The award, voted for by journalists and organised by French magazine France Football, has been dominated by Barcelona's Messi and Ronaldo, first when he was at Manchester United and subsequently with Real Madrid, since 2008.

The last player to lift the award apart from the Argentine and Portuguese, who have won it a joint-record five times each, was Kaka in 2007 when the Brazilian played for AC Milan.

But despite being recognized as the best female footballer in the world, the outspoken 23-year-old Hegerberg said she won't play for Norway at the Women's World Cup in France next June.

Taking a stand against what she describes as a lack of respect for female players in Norway, Hegerberg hasn't played for the natihe word 'proud' but today I'm really proud," she told The AP.

But she also expressed frustration with the uneven pace of progress for women.

"Sometimes you have episodes or situations where you feel like, 'Damn, we're in such a man's world,'" she said. "That could be in a daily situation, being a woman, to be honest. Outside of the pitch as well. There's a lot of discussions to take and to bring on the table as a woman in 2018. Being a women's footballer and winning the Ballon d'Or tonight is a step for me to take that action, personally."

The Ballon d'Or was first awarded in 1956 and was partnered with soccer's world governing body FIFA under the title 'The Best' from 2010 to 2015, until becoming its own entity again.