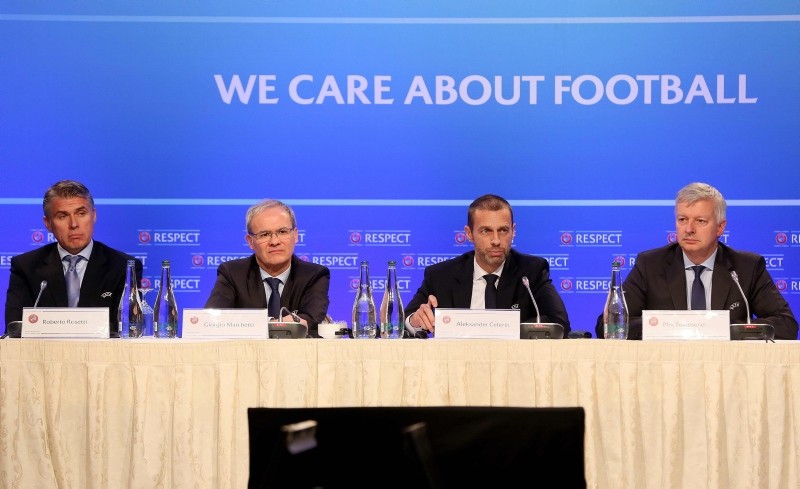 UEFA will fast-track the implementation of video assistant referees (VAR) for the Champions League knockout stages this season, its president Aleksander Ceferin said on Monday.

European soccer's governing body opted against using VAR this season, despite the technology being employed by major European leagues of La Liga in Spain, Serie A in Italy and Bundesliga in Germany, and the World Cup in Russia this year. Turkish Super League also uses VAr starting for this season.

But Ceferin flagged recently that a report being prepared by UEFA's referees chief could allow its Executive Committee to revise its stance. It also agreed on Monday to roll out the technology in this season's Europa League final and next June's finals of UEFA's new Nations League competition.

"To be very straightforward with you, we discussed with our colleagues if we can do it before, why wait because it's hard to afford any mistakes," Ceferin told a news conference at the end of a two-day meeting of the Executive Committee in Dublin.

UEFA referees chief Roberto Rosetti said UEFA would use the same protocol as other associations but would seek in its guidelines to define the line of intervention clearly.

"We are speaking about consistency, uniformity. The communication is another key part of the project. We have to be very clear and communicate in the best way to the fans, players and coaches," Rosetti said.

UEFA said in a statement that it decided to fast-track the implementation of VAR in the Round of 16 "following successful technological testing and the training of referees over the last few months."

VAR will also be used at the UEFA Europa League Final 2019 and in the UEFA Nations Leagues Finals 2019, it said.

As already decided in September, VAR will also be used in the 2019/20 UEFA Champions League, as of the play-off stage of the competition, and at the 2019 UEFA Super Cup.

"UEFA still plans to subsequently extend the use of VAR at the final tournament of UEFA EURO 2020, in the 2020/21 UEFA Europa League [group-stage onwards], and in the 2021 UEFA Nations League Finals," the statement added.

The meeting also confirmed Portugal will host the inaugural Nations League finals, England will have the women's Euros in 2021 and the men's under-21 championships that year will be in Slovenia/Hungary.

Ceferin also said that he is against different confederations combining to host the World Cup.

Spain has floated the idea of bidding for the 2030 World Cup along with Portugal and Morocco.

Ceferin says he is also irritated that the plan came from politicians rather than the country's soccer association.

The leaders of Bulgaria, Greece, Romania and Serbia have said they will bid for the tournament, while England is leading plans for a British Isles bid. There is also expected to be a South American bid from Argentina, Paraguay and Uruguay.

Ceferin says "I do whatever I can to have only one European bid for the World Cup. That will raise the chances of Europe hosting the World Cup."

Ceferin was speaking after a meeting of the UEFA executive committee, which confirmed video assistant referees would be fast-tracked in the Champions League and be introduced from the round of 16.