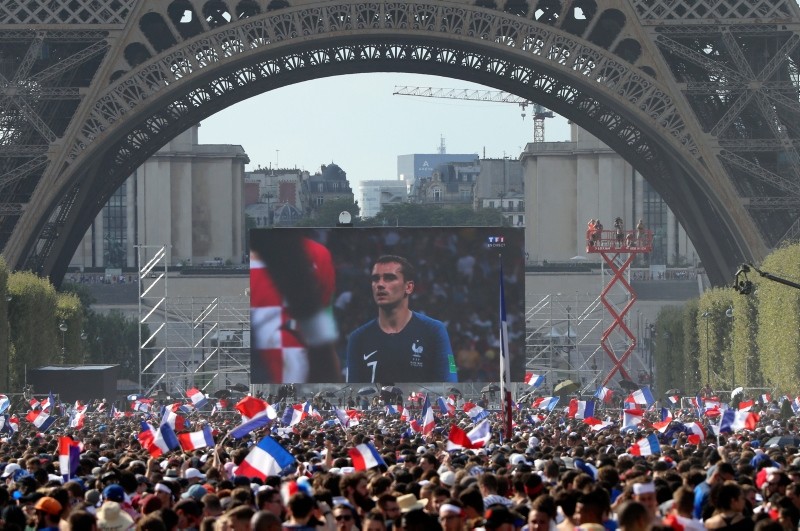 In this Sunday, July 15, 2018 file photo, people watch a giant screen during the World Cup final between France and Croatia, on the Champ de Mars next to the Eiffel Tower in Paris. (AP Photo)
by Compiled from Wire Services Dec 21, 2018 12:00 am

A record 3.572 billion people watched the 2018 FIFA World Cup in Russia on TV or on digital platforms, FIFA said on Friday.

France's 4-2 victory in the final, which gave them their second World Cup title following their triumph in 1998, was the most watched game of the competition. It was seen live by a combined 1.12 billion viewers worldwide, FIFA said in a statement, revealing their data for the World Cup.

It was followed by England's semi-final defeat to Croatia and the other last-four clash between France and Belgium.

The competition was broadcast live in every territory around the world between June 14-July 15, according to the statement.

"A combined 3.572 billion viewers -- more than half of the global population aged four and over -- tuned in to world football's ultimate competition, according to audience data for official broadcast coverage of the 2018 FIFA World Cup," it said.

Over the 64 matches, the average live audience was 191 million, it added.

FIFA also said: "The global in-home TV audience watching at least one minute of coverage totalled 3.262 billion, while a further estimated 309.7 million people watched no coverage in home but caught the action on digital platforms, in public viewing areas or in bars and restaurants, boosting the total audience by 9.5 percent."

That proportion was higher for the final between France and Croatia. FIFA said 884.37 million viewers tuning in to traditional TV coverage and a further 231.82 million watching outside the home or digitally.

"These figures really do support the claim that Russia 2018 was the best World Cup ever. We're particularly pleased to see an increase in the average time viewers are engaging with matches, which shows that we are giving the fans what they want," said FIFA's Chief Commercial Officer Philippe Le Floc'h as quoted in the statement.

"The fact that half the world's population watched the FIFA World Cup reflects not just the high quality of our award-winning live coverage, but also that fans everywhere are insatiable for world-class football."

The World Cup coverage reached around 1.6 billion individuals in Asia, with 655.7 million viewers (18.4 percent of the global total) in China, who failed to qualify for the tournament.

But the live match audience for the final was down 5.1 per cent and that of the semi-finals even 15.5 per cent less than 2014, with the audit saying that reasons included the smaller population of countries involved and only one confederation (Europe) represented in the last four in Russia. Group stage and last 16 viewership rose by comparison.

The 2022 edition of World Cup will be held in Qatar.