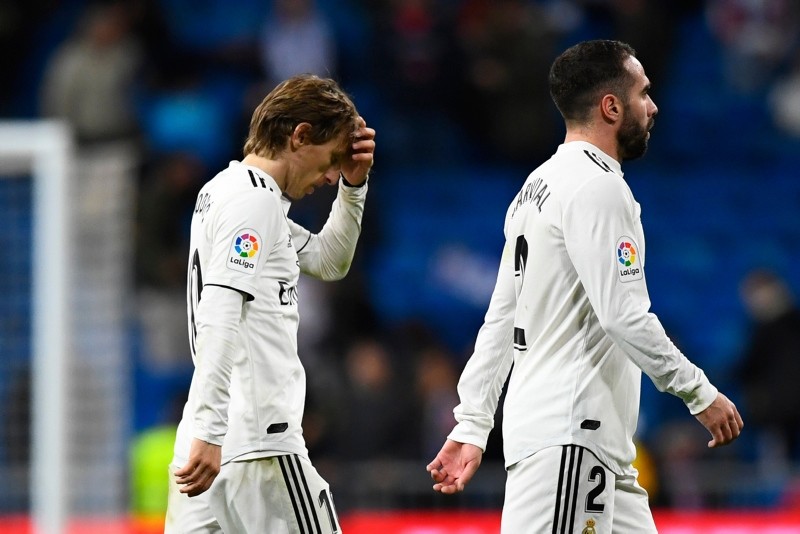 Real Madrid's Croatian midfielder Luka Modric (L) and Spanish defender Dani Carvajal leave the pitch at the end of the Spanish League football match against Real Sociedad at the Santiago Bernabeu stadium in Madrid on January 6, 2019. (AFP Photo)
by Associated Press Jan 06, 2019 12:00 am

Madrid is in fifth place behind Alaves, which moved ahead of the 33-time champion on Saturday.

Madrid fell behind in the third minute when Willian Jose converted a penalty following a foul by Casemiro on Mikel Merino.

Madrid went a man down in the 61st when Lucas Vazquez received his second yellow card.

Sociedad clung to a 1-0 advantage until the final minutes, when Madrid poured forward and exposed goalkeeper Thibaut Courtois to repeated counterattacks. Substitute Ruben Pardo finally capitalized in the 83rd by heading in a pass from Willian Jose when he was left alone in the box.

Led by the vibrant attacking of 18-year-old Vinicius Junior, Madrid created several scoring chances that it failed to finish off.

Sociedad got the win in its first match since coach Imanol Alguacil replaced the fired Asier Garitano. Alguacil was promoted from Sociedad's reserve team last week. He also coached its first team at the end of last season.

Madrid's defeat came just days after it was held to a 2-2 draw at Villarreal.

Leader Barcelona visits Getafe later on Sunday. The defending champion is seven points ahead of Madrid.

Vinicius was making his first league start. Coach Santiago Solari chose the young Brazilian to take the place of injured Gareth Bale in the starting 11. He responded with several promising moves, bursts of speed and one strike that almost made it 1-1 early in the second half.