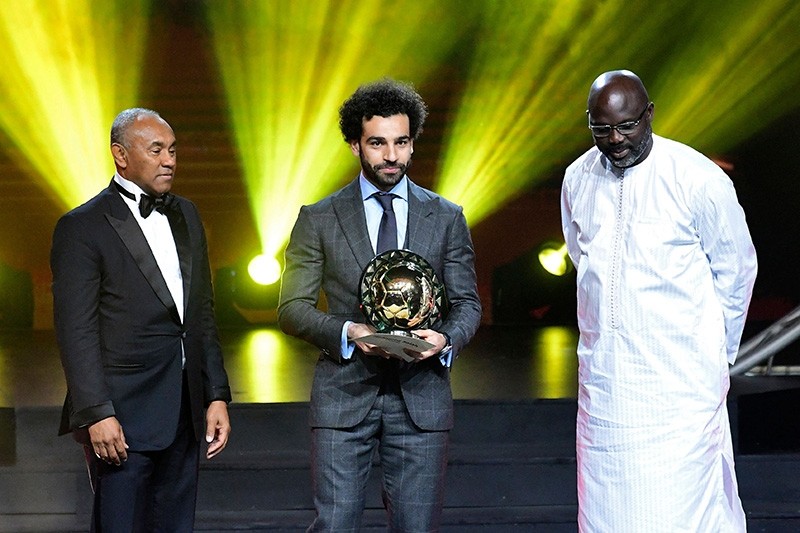 Egypt striker Mohamed Salah was voted as the African Footballer of the Year for the second successive year at the Confederation of African Football's awards ceremony in Dakar on Tuesday.

The 26-year-old Liverpool star finished first with club-mate Senegalese Sadio Mane and Arsenal and Gabon striker Pierre-Emerick Aubameyang the other finalists. He edged the same two players last year in a vote decided by the technical directors and head coaches of 56 CAF member associations.

"I have dreamt of winning this award since I was a child and now I have done so twice in a row," Salah said when collecting his trophy for his 2018 exploits.

"I'm proud to win it twice, I must thank my family and my teammates, and I dedicate this award to my country, Egypt."

It was an identical outcome to last year when Salah became only the second Egyptian after 1983 winner Mahmoud al Khatib to be voted the best footballer in Africa.

Delays to preparations and concerns about security resulted in the central African nation being replaced as hosts, and they will stage the 2021 tournament instead.

While the 15-vote winning margin for Egypt was unexpected, the success of Salah was anticipated as he continues to score regularly for the English Premier League leaders.

Salah netted 44 goals in all competitions for Liverpool last season -- his first with the Anfield club -- and has bagged 13 Premier League goals so far this season.

Ironically, Aubameyang has scored one league goal more than Salah, topping the charts with Tottenham Hotspur and England star Harry Kane on 14.

Salah was born in a northern Egyptian town Nagrig and used to make eight-hour return trips on buses to train with Cairo-based El Mokawloon (Arab Contractors).

Spotted by scouts from Swiss club Basel, he moved there in 2012 before joining Premier League giants Chelsea two years later.

Salah found scoring difficult early in his professional career and was nicknamed "chancentod" (chance killer) by the Swiss media.

Later, playing for Chelsea in a League Cup tie, the Egyptian was so off-target with a goal attempt that the ball trickled over the touchline for a throw-in.

Unhappy with his two-goal return, Chelsea lent Salah to Italian outfits Fiorentina and Roma, then sold him to the latter club.

Salah blossomed in Rome, averaging close to a goal every two matches, and Liverpool paid almost 37 million pounds (about $47 mn/41 mn euros) to sign him two years ago.

The Egyptian had his share of setbacks last year, too, with an injury in the Champions League final loss to Real Madrid also keeping him out of a World Cup defeat by Uruguay.

He returned to score against hosts Russia and Saudi Arabia, but the Pharaohs exited their first appearance at the global showpiece in 28 years without securing even one point.

Salah netted twice and missed two penalties three months later in a 6-0 Cup of Nations rout of Niger and snatched the late winner in a 3-2 victory over Tunisia in the same competition.

Having defended his Player of the Year title, his next goal will be to match the four straight wins in the competition by former Manchester City and Ivory Coast star Yaya Toure.

The other male awards went to France-born Morocco coach Herve Renard, the Mauritania national team, and Moroccan Achraf Hakimi in the youth category.

South African Chrestinah Kgatlana was voted Women's Player of the Year and South Africa coach Desiree Ellis and the Nigeria national team were the other female winners.

The Goal of the Year award also went to Kgatlana.