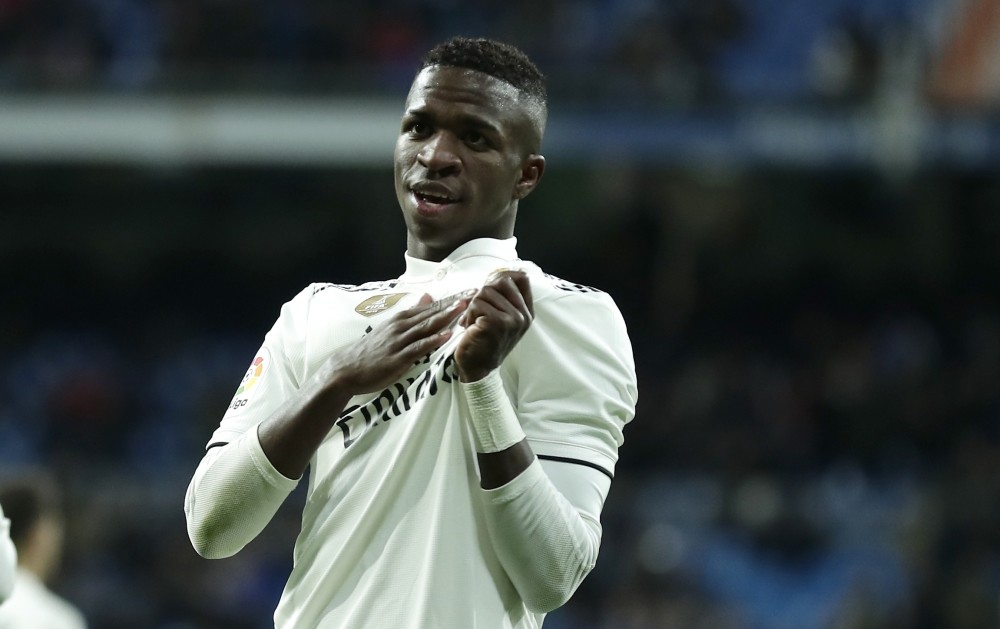 Real Madrid's season has been thoroughly disappointing, but one ray of light is the growing confidence of young Brazilian forward Vinicius Junior.

The 18-year-old striker scored a spectacular volley in Madrid's 3-0 win over Leganes in the Copa del Rey last 16 first leg on Wednesday and it may be enough to earn him a place in the side at Real Betis on Sunday.

Madrid, fifth, travel south to face Quique Setien's side, right behind them in sixth, in a match where anything less than a victory could see the European champions slip further away from the top four.

Real Madrid have been lacking firepower up front this season after the club's all-time top goalscorer Cristiano Ronaldo left for Juventus in July, but Vinicius is growing into his place in the Madrid squad. In the defeat by Real Sociedad last weekend that left Madrid 10 points behind leaders Barcelona, Vinicius was one of few players who emerged with their head held high. And as Madrid travel to the Benito Villamarin, there is an increasing feeling that the team's fate this season could lie in the hands of a teenager.

With Toni Kroos, Gareth Bale, Marco Asensio and Thibaut Courtois out injured, Vincius may need to conjure up something else special on the weekend. "It was a very good performance, Vinicius is making huge strides," said coach Santiago Solari after the cup win over Leganes. "He's always had the talent, but to develop it at the Bernabeu, surrounded by wonderful players, says a lot about his confidence, rawness and the enjoyment he exudes when he has the ball at his feet. "We're very happy with his current performances. He's been able to take people on and that ability to beat a man is so important in modern-day football. We hope he continues to grow from both an individual and team point of view."

Leaders Barcelona hope to maintain or extend their five point advantage on second place Atletico Madrid when they host Eibar on Sunday. The Catalans, who play at Levante on Thursday in the cup, have earned five consecutive La Liga wins to settle themselves down after a shaky start to their title defence. However when Basque minnows Eibar visit, Barcelona will come up against a familiar face in Marc Cucurella. The versatile fullback is on loan at Ipurua from the Catalan giants this season and has impressed, usually deployed as a left winger by coach Jose Luis Mendilibar. "I've been coming through the [Barca] youth system for many years and this is the first time I will play against Barcelona," said the 20-year-old. "It will be a special and really hard-fought game, it will be difficult but we are going with all our hope to get a good result. "They have one of the best squads in Europe, it will be so tough. We have to make sure they feel uncomfortable and aren't settled down at any moment. "We will have to run a lot and give everything, it has to be an almost perfect game to take something from Camp Nou."

The weekend's other fixtures are Rayo Vallecano vs. Celta Vigo, Leganes vs. Huesca, Valencia vs. Real Valladolid, Girona vs. Alaves, Villarreal vs. Getafe, Atletico Madrid vs. Levante, Athletic Bilbao vs. Sevilla and Real Sociedad vs. Espanyol.