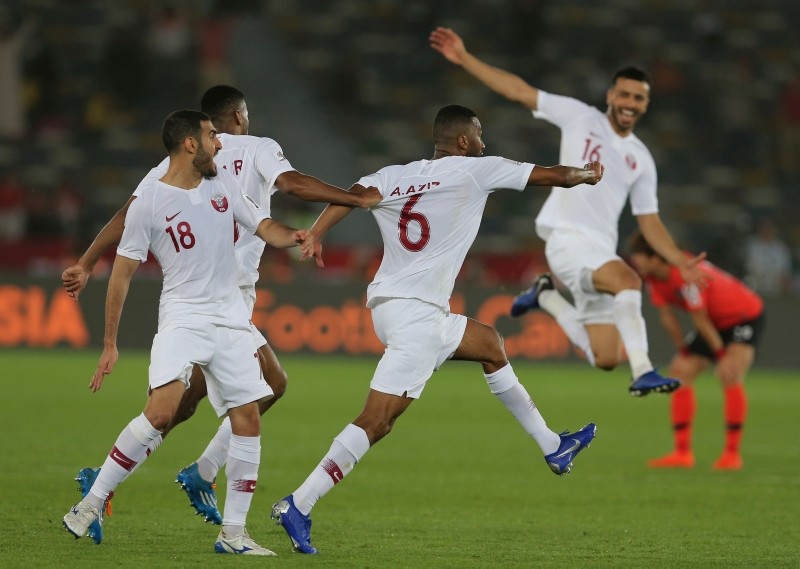 Qatar's midfielder Abdelaziz Hatem, center, celebrates his opening goal with his teammates, during the AFC Asian Cup quarterfinal match between Korea Republic and Qatar at the Zayed Sport City Stadium in Abu Dhabi, UAE, Jan. 25, 2019. (AP Photo)
by Jan 25, 2019 12:00 am

South Korea were looking to end 59 years of hurt in the tournament but missed a string of second-half chances in Abu Dhabi before Hatim's hammer blow after 78 minutes.

It took the Koreans until three minutes into the second half to register a shot on target, Hwang Ui-jo forcing a low save from Saad Al-Sheeb from the edge of the box.

Lee Chung-yong then blazed wide and captain Son Heung-min was denied by Al-Sheeb before Kim Jin-su's free kick smacked against the post.

That wastefulness came back to haunt them when Hatim smashed a long-range rocket past goalkeeper Kim Seung-gyu to give the 2022 World Cup hosts a famous victory.

Hwang thought he had equalised two minutes later, only to be given offside — a decision upheld by the video assistant referee.

Qatar's semifinal opponents will be either hosts United Arab Emirates or holders Australia, meeting in Al-Ain later on Friday.