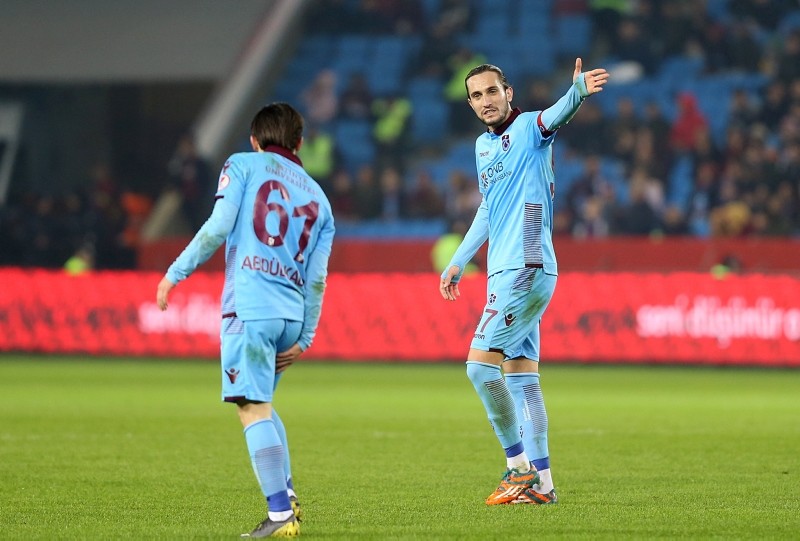 The Turkish Super League saw a decline in new foreign transfers this season, while its homegrown stars made the waves. Abdülkadir Ömür and Yusuf Yazıcı stand out among them, and a report by the Transfermarkt website shows their transfer value has skyrocketed in one year. Veteran names like Islam Slimani and Arda Turan, meanwhile, showed a lackluster performance this season and saw a sharp drop in transfer value, according to the report.

Ömür and Yazıcı were the breakout stars of the season in terms of transfer value as the 19-year-old Ömür, nicknamed Turkish Messi, boosted his value from 700,000 euros ($789,141) to 10 million euros between January 2018 and February 2019. The midfielder, who drew interest from Premier League side Liverpool and other European powerhouses this season, launched his career with Trabzonspor U-16 team. He has scored two goals and made five assists in his 1,563 minutes of playing time in the Super League this season. Under fire for lackluster performance in recent matches, Ömür said in a recent interview that he'd be back in form as he recovers from thigh pains.

Yazıcı, who also started out in the U-16 team like Ömür, was targeted by Cardiff City but chose to stay with the Turkish outfit, which is currently fifth in the Super League. The 22-year-old saw his value rise from 2.5 million euros to 11 million euros.

Eljif Elmas, a North Macedonian player who joined Fenerbahçe in the 2017-2018 season, is the third player in Turkey with the highest rise in value. Elmas is now worth 7.5 million euros, a far cry from 500,000 euros last year. The 19-year-old midfielder is among the favorite players in the starting 11 this season as Fenerbahçe struggles to rise in the Super League where it came dangerously close to relegation in the first half of the season.

Meanwhile, Islam Slimani, another Fenerbahçe star, saw a career-low in transfer value, along with Arda Turan, a former player for Atletico Madrid and Barcelona, who joined Super League leader Medipol Başakşehir in the 2017-2018 season. Slimani was worth 25 million euros one year ago, and the 30-year-old Algerian international, who joined Fenerbahçe on loan from Leicester City, is now worth 10 million euros. A flop in the Premier League side, Slimani fares better in Yellow Canaries' European competitions, though he failed to meet the expectations of Fener fans in the local league. Arda Turan, who scored only two goals and two assists in 20 games for Başakşehir, also declined in value, from 12 million euros to 1.5 million euros. Turan was more occupied with legal problems this season after a well-publicized altercation with a pop singer in a nightclub in Istanbul landed the 32-year-old in hot water.