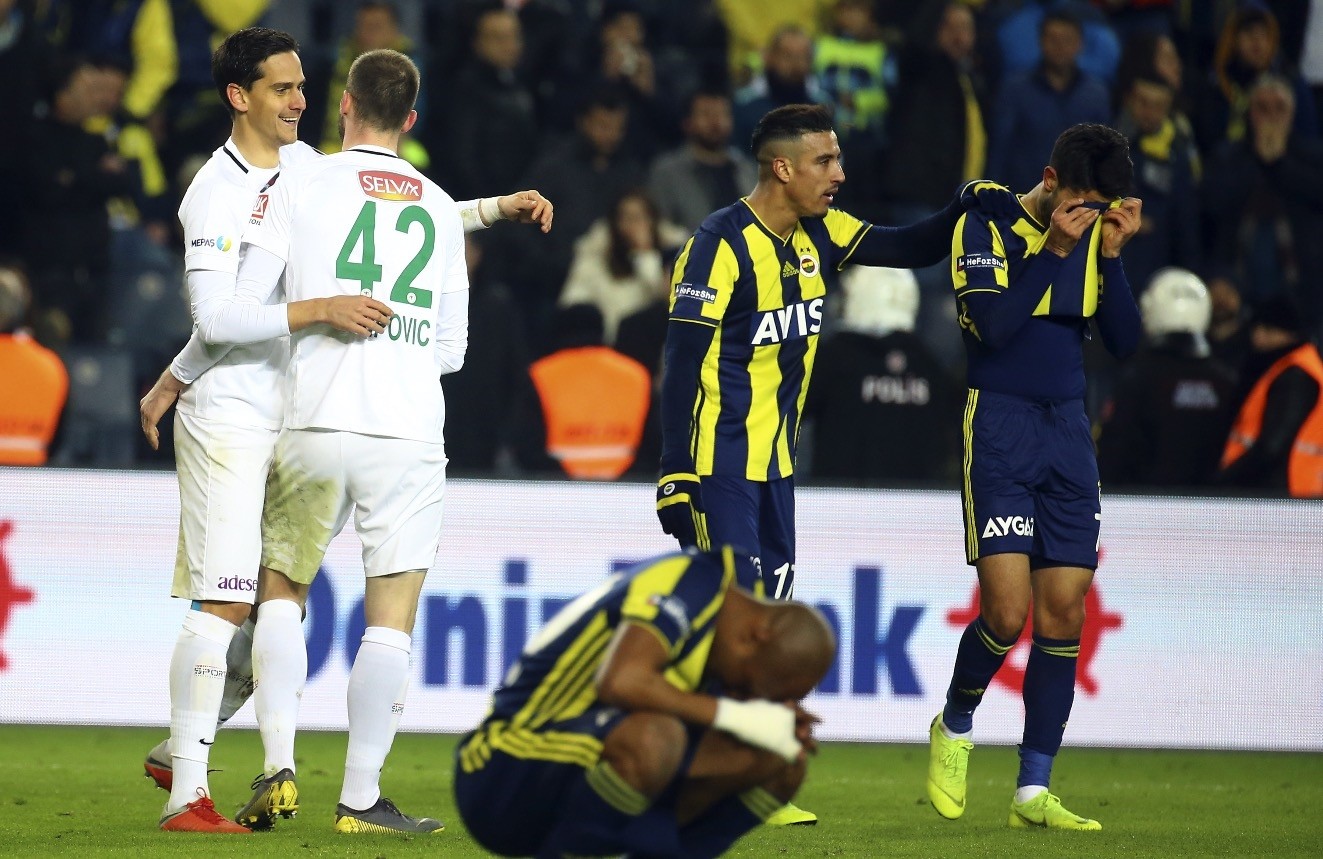 Alper Potuk wipes his tears with his jersey while Nabil Dirar buries his head between his legs at the end of Konyaspor match in Istanbul Feb. 17, 2019 while Konyaspor players Petar Filipovic (left) and Deni Milosevic (second left) cheer.
by Daily Sabah Feb 18, 2019 12:02 am

Continuing its slump in the Super League, Fenerbahçe has gained notoriety for its string of home losses and draws lately. Turkish coach Ersun Yanal was unable to end the streak of failures under the Dutch coaches he took the helms from with the latest upset coming in Saturday's 1-1 draw against Atiker Konyaspor

On the brink of being relegated from the Turkish Super League, Fenerbahçe has left 16 points on the table this season in home matches with the latest coming in Saturday's 1-1 draw against Atiker Konyaspor. This is by far the worst performance for the Yellow Canaries in the past 28 seasons when it comes to home games, as the 11 home matches it hosted this season attest to.

It is safe to say that the team's unenviable record is the doing of Dutch coach Phillip Cocu and his successor and expatriate Erwin Koeman. Coincidentally, Fenerbahçe saw its worst record of home losses and draws under another Dutchman Guus Hiddink in the 1990-91 season.

Ersun Yanal, the Turkish coach who succeeded Koeman last season, failed to impress in week 22 but according to him he is only warming up with the Yellow Canaries. His is not an easy task after Phillip Cocu left the team in disarray, driving the former powerhouse to the relegation zone, far behind its league rivals Galatasaray and Beşiktaş. Cocu started out well by helping Fenerbahçe snatch three points in its first home game against Bursaspor but the following matches proved disastrous for the Yellow Canaries. The team managed only one win in five Super League games it hosted under Cocu.

Koeman replaced Cocu and like his successor, he started off with a promising display for fans with a 2-0 win against Alanyaspor in his first home game. But that was the only home win for the coach.

So far, Ersun Yanal has also failed to turn the team's fortunes around. Under Yanal, the team has secured only two wins in seven Super League games it hosted. It is a far cry from Fenerbahçe's home wins in the 2013-14 season where Yanal helped the team win its last league title. Still, Yanal is confident that Fenerbahçe will "get out of the difficult situation it is in." Speaking in a post-match press conference on Saturday, Yanal, whose team will take on Beşiktaş in a derby match later this month, said good days were ahead. Downplaying the lackluster performance of forward Islam Slimani, Yanal said football does not rely solely on forwards.

"We try to put on a good show with players we have and we are trying to do many things at the same time. A bad result certainly sticks out but Fenerbahçe will be able to overcome the obstacles it faces," he said.

This is a bold statement to make as Fenerbahçe are in 15th place - one spot away from the relegation zone - after this weekend's stalemate with Konyaspor. Adding insult to injury, Konyaspor managed to score three minutes after it was cut down to 10 players when Adis Jahovic was sent off in the 33rd minute with a red card. Fenerbahçe managed to secure a draw with Jailson's goal in extra time in the first half but that was about it as the Yellow Canaries squandered multiple opportunities to score in the second half.