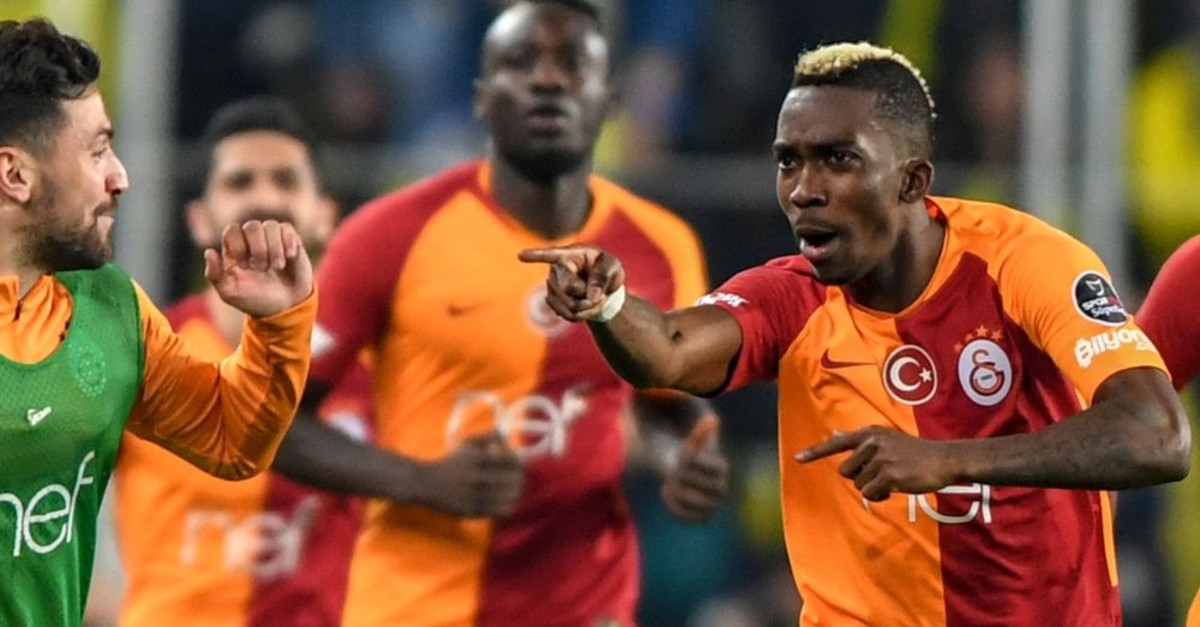 Fenerbahçe and Galatasaray's Süper Lig derby ended with a 1-1 draw with Galatasaray angered over a repeat of ‘referee mistakes,' undermining their chance to win

Galatasaray was to be the clear favorite even in an away game against Fenerbahçe but things took a dire turn for the Süper Lig runner-up in Sunday night's much-anticipated derby. The Lions secured a 1-1 draw with their ailing rival which is hovering above danger zone this season, to the chagrin of Galatasaray executives and coaches over what they termed a biased referee ruling that overshadowed the game.

Neither team was able to score in the first half at Fenerbahçe's Şükrü Saraçoğlu stadium in Istanbul. Fenerbahçe's Hasan Ali Kaldırım received a red card in the 45th minute after his challenge on Galatasaray's top scorer Mbaye Diagne and the home team finished the game with 10 men after the referee Ali Palabıyık ruled that he deserved a red card instead of yellow after consulting the video-assisted referee (VAR). Galatasaray could not use this advantage to beat the home team and get closer to the top of the league.

Galatasaray scored the first goal with Henry Onyekuru's header in the 66th minute while Fenerbahçe's Eljif Elmas equalized in the 71st minute. With 56 points, Galatasaray is currently second and five points away from Süper Lig leader Medipol Başakşehir while Fenerbahçe is in 14th position with 33 points. Galatasaray has not been able to beat the Yellow Canaries in Fenerbahçe's stadium in the last 23 away matches for the past 19 years.

Palabıyık's decisions brought back bad memories for Galatasaray which complained of bias against the team in past games. "We always remained silent because we have dignity," Galatasaray Deputy Chairman Abdürrahim Albayrak told reporters after the match before firing a salvo of criticism. "There was this penalty ruling [in favor of Konyaspor] in a previous match despite assistant referee's audible statement to the referee that it was not a position requiring a penalty kick. Today, we see it again. What they've done to Linnes should have been punished with a red card," Albayrak said.

The Norwegian defender said in post-match statements that Fenerbahçe deserved "at least three red cards," saying he was "elbowed and kicked in the stomach" by rival players but none were booked for a red card. Albayrak said Fenerbahçe players' "stepped on the feet of" Gala's Algerian midfielder Feghouli before Elmas' equalizing goal but referees did not produce a yellow card.

Galatasaray coach Fatih Terim also criticized referee rulings, echoing Albayrak's statement about Feghouli. "We get used to such rulings. They book us, ban us. This happens a lot to Galatasaray for some reason," Terim said. "This is obvious especially when there are only five games before the end of the season," the veteran coach said in a post-match press conference, lamenting the loss of points in their fight for the title.

On the other hand, Fenerbahçe downplayed referee rulings. Coach Ersun Yanal said referees can "make mistakes like everyone else in football." "We had our fair share of suffering [because of referees] and this even led to a reshuffle of the referees' committee of the football federation," Yanal said in a post-match press conference, referring to a string of what Fenerbahçe called biased rulings against the Yellow Canaries and other teams that led to resignation of referee committee head Yusuf Namoğlu in February.

Yanal said it would be difficult to break his team's run of wins at home even if there wasn't any supposed ruling against Galatasaray.

Semih Özsoy, acting president of Fenerbahçe, was brasher in his comments about the match. "They can't and will not defeat us here at home," Özsoy said after the match. He also criticized Fatih Terim for "managing the match rather than the team."

"He is somehow not mentioning why Younes Belhanda was not booked for a yellow card for what he did in the 19th minute," Özsoy said, referring to the French midfielder's action against Galatasaray defender Serdar Aziz. Galatasaray claimed Belhanda purposely stepped on Aziz's ankle.

Özsoy added that Fatih Terim spoke about "good times in Fenerbahçe's stadium" but it won the Süper Lig title "while Fenerbahçe's chairman and executives were jailed by the Gülenist Terror Group (FETÖ)," alluding that the win was when Fenerbahçe's morale was low. Fenerbahçe's former chairman Aziz Yıldırım and top executives of the team were jailed over match-fixing allegations in 2012 in a trial which turned out to be a sham trial later perpetrated by the judiciary and police infiltrators of FETÖ.