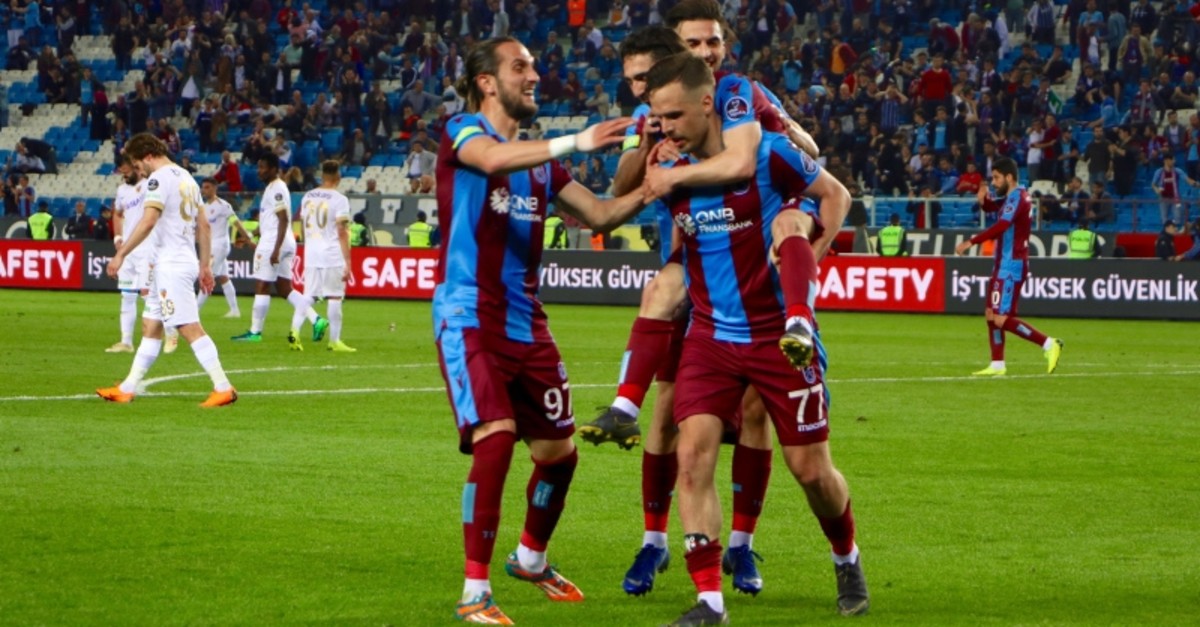 Trabzonspor's Filip Novak celebrates the team's fourth goal with his teammates in 31th week match against Kayserispor at u015eenol Gu00fcneu015f Stadium, in Trabzon, northern Turkey, May 6, 2018. (AA Photo)
by Daily Sabah with AA May 07, 2019 4:29 pm

The Black Sea club Trabzonspor guaranteed secured at least a fourth-place finish in the Turkish Süper Lig with Monday's 4-2 win over Istikbal Mobilya Kayserispor, qualifying for the UEFA Europe League after three years and eyeing finishing the season third over Beşiktaş.

With the win on their home turf Şenol Güneş Stadium in the northern city of Trabzon, the claret-blues extended the gap between their closest followers Evkur Yeni Malatyaspor by 12 points with only three matches left, meaning that they secured participation in Europa League's second qualification round.

Argentine midfielder Jose Ernesto Sosa gave Trabzonspor the lead with a free kick goal in the 16th minute. Yusuf Yazıcı brought the score to 2-0 as he sent the ball from Colombian forward Hugo Rodallega's shot, which bounced off the goal post, back into the net. Kayseripor responded with Hasan Hüseyin Acar's shot in the 32th minute with the first half ending with Trabzonspor in the lead. Acar's equalizing header in the 64th minute brought the score to 2-2, but Abdülkadir Ömür responded in the next minute. Czech defender Filip Novak determined the final score in the 84th minute as he chipped the ball over Kayserispor goalie Muammer Zülfikar Yıldırım.

Trabzonspor manager Ünal Karaman said they are happy with the win and now they are focused on next week's match against Atiker Konyaspor, currently placed eighth in the league.

The match against Beşiktaş will be the most meaningful match of the season if Trabzonspor wins the match against Konyaspor, club president Ahmet Ağaoğlu said, noting that they have the chance to finish the season in third or above. Ağaoğlu noted that they had seven wins and two draws in the last nine weeks, expressing confidence that the team is able to win the remaining three.

Established in 1967, Trabzonspor, famous for its fierce fan base, was the only club not based in Istanbul to have won the Turkish champions title until Bursaspor's championship in 2010. With six league titles between 1976 and 1984, the club was nicknamed the "Black Sea Storm," in addition to eight Turkish Cup and eight Turkish Super Cup victories in their history. However, they could not repeat this success in the European theater, with their highest achievement being rising twice to the third leg of UEFA Cup, the predecessor of Europa League.