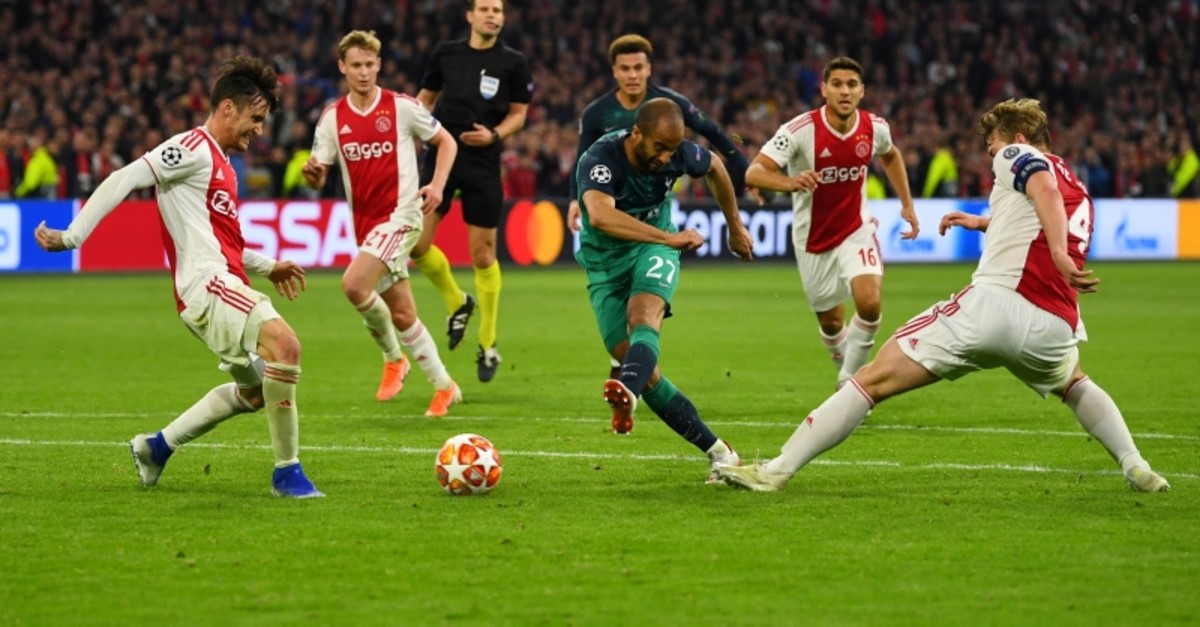 Tottenham Hotspur beat Ajax Amsterdam on the away goals rule after the teams finished 3-3 on aggregate on Wednesday to set up a showdown with Liverpool in the Champions League final.

Spurs beat Ajax 3-2 in the second leg of the semi-final on Wednesday and will face Liverpool on June 1 in Madrid.

A day after Liverpool stunned Barcelona by erasing a three-goal deficit at Anfield, Moura nearly single-handedly helped Tottenham pull off a similar feat in Amsterdam.

Ajax seemed to have the two-legged semifinal wrapped up by halftime after goals from teenage captain Matthijs de Ligt and Hakim Ziyech put it 2-0 up at the break and 3-0 on aggregate.

But Lucas Moura scored twice in a four-minute span to level the score on the evening and put the visitors one goal from going through on the away goals rule.

After Jan Vertonghen's header hit the crossbar in the 87th minute, that goal finally arrived when Moura struck again deep into injury time. Dele Alli laid the ball off the Brazilian as he streaked into the area and his low shot crept inside the right post to complete another improbable victory.

Tottenham, playing in their first European Cup semi-final for 57 years, arrived in Amsterdam on a run of woeful form having suffered three successive defeats in all competitions.

Ajax, by contrast, were buoyant after winning the Dutch Cup final at the weekend, and they began on the front foot with Dusan Tadic forcing a flying save from Hugo Lloris.

When the resulting corner came, Tottenham's marking was non-existent as De Ligt glanced his header home.

It did not change the basic equation for Tottenham who knew they needed to score twice and Mauricio Pochettino's side, so disappointing last week, responded in spirited fashion.

Son Heung-min, back after missing the first leg because of suspension, deceived keeper Onana with a cross that hit the post and Son then forced another save from a flowing move.

But Ajax were cool, calm and collected and bided their time before striking again in devastating fashion.

Tadic, who moments earlier had dragged a shot just wide, was released down the left and he cut the ball back perfectly for Ziyech to whip a left-footed shot inside the far post.

Tottenham sent on veteran striker Fernando Llorente for midfielder Victor Wanyama for the start of the second half and pushed Ajax back.

Dele Alli was denied by Onana but Tottenham grabbed a lifeline soon after when a rapid counter-attack ended with Moura converting in style after sprinting through to meet Alli's pass in the 55th minute.

Four minutes later the impossible began to look possible as Onana saved brilliantly from Llorente but Ajax failed to clear the ball and Moura fired through a crowd.

In a rip-roaring finale played out in nerve-shredding tension Ziyech almost restored Ajax's lead when his slow shot thudded against the post while a desperate lunging block by De Lijt denied Moura.

When former Ajax defender Jan Vertonghen headed against the crossbar late on it seemed Tottenham would fall just short, as they did 57 years ago in their only other European Cup semi-final, but there was one final twist.

A high ball pumped forward was flicked to Moura by Alli and the Brazilian's first-time shot found the corner.

While Tottenham celebrated an unlikely recovery, Ajax's journey that began in the second qualifying round in July, ended in abject misery and disbelief.