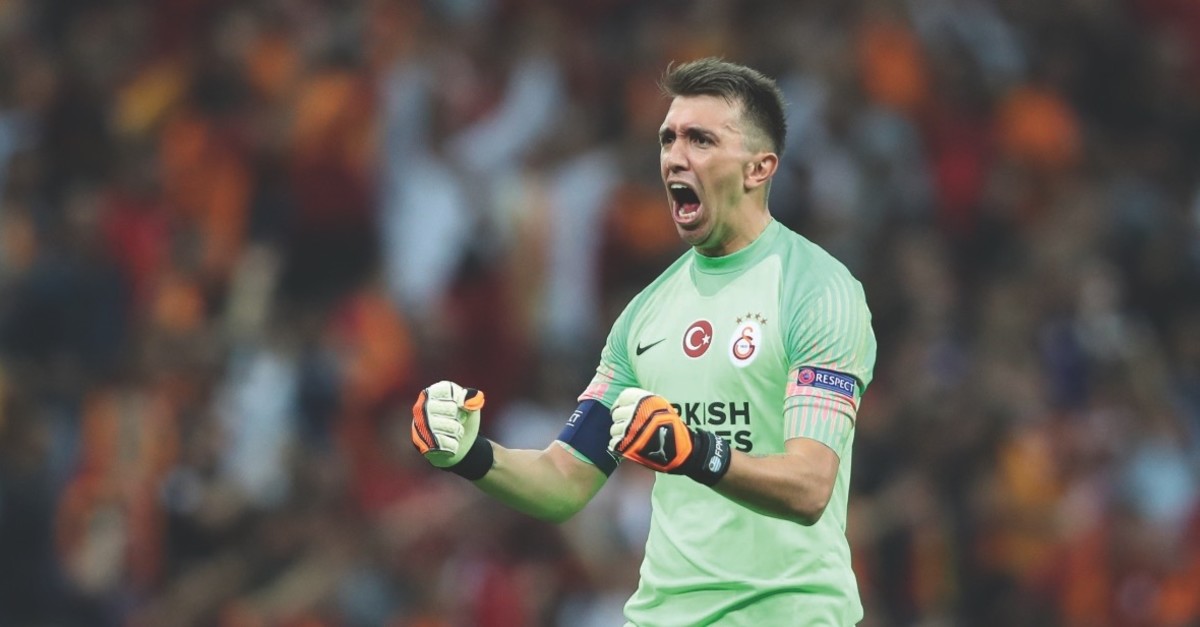 Galatasaray goalkeeper Fernando Muslera has nothing but praise for coach Fatih Terim as the Lions celebrate their 22nd Süper Lig title. The Uruguayan goalkeeper, the longest-serving player in the team with a 10-year deal, says Galatasaray will remain a favorite in the title race for years to come

Galatasaray lifted its 22nd Süper Lig title last week and the team's Uruguayan goalkeeper Fernando Muslera is among the main contributors for the success. In his eighth year with Galatasaray and two years before his contract expires, Muslera called Galatasaray the clear favorite in any title race. The 32-year-old also couldn't praise coach Fatih Terim enough. The "Emperor," as Terim is called in Turkey because of his resume of being the most successful coach ever in the country, is like "a father," Muslera said.

The veteran goalkeeper spent most of his career in Uruguay before moving to Lazio in 2007 and after four years with the Italian side, he joined Galatasaray in 2011 on a record 10-year deal, a rare long-term contract in a volatile world of transfers in Turkish football.

This season, he was the most stable player for Galatasaray, clocking a playing time of 2,970 minutes and taking his spot in the starting 11 in 33 matches, the highest for any player in the team. Muslera conceded an average of almost one goal per game, making him one of the top goalkeepers of the Süper Lig.

"When I first arrived here to join Galatasaray, I told reporters that I want to see as many trophies as we can win and today, I am the part of a team which won five league titles, four Turkey Cups and four Super Cups. I am incredibly happy. This was the result of teamwork and most importantly, thanks to Fatih Terim," Muslera said.

He joined the Lions the same season Terim first helped Galatasaray win the league title, with an impressive comeback after stints in Italy. Terim had left to helm the national team but returned last season.

This time around, Galatasaray was trailing Medipol Başakşehir for most of the season, before it reversed its fortune and won the league title by beating Başakşehir 2-1 last week in the second to last game of the season.

"I only hope there will be more trophies until my contract expires," Muslera added.

One thing the goalkeeper complained about is the "lack of respect" for Galatasaray as the team drew the ire of both the media and rival teams for perceived biases of referees in favor of the Lions and verbal quarrels between the club's administrators and Terim with rivals and the media.

"Everyone needs to respect Galatasaray the utmost. This is a historic team with a loyal fan base. Galatasaray never gave up in its fight for the title and deserved its wins," Muslera said. "The team never quit no matter what, even when there was an eight-point gap [with leader Başakşehir]. This was what the coach instilled in us. Galatasaray had and has potential and quality," the goalkeeper said.

He congratulated Başakşehir for two consecutive seasons finishing as runner-ups. "They certainly fought to the end but you have to respect Galatasaray. It is not over until Galatasaray says it is over," a confident Muslera said, adding that they always firmly believed in the team and had "that passion" thanks to Terim.

"Galatasaray is always the clear favorite," he added.

The goalkeeper said it was Terim who brought him to Galatasaray and he views him as the best coach in Turkey.

"I am here thanks to him and he is the only one responsible for my accomplishments at Galatasaray. We are like a father and son with him. He definitely gives you confidence and is very intimate with players. I talk to him not only on matters about football but about my private life. This applies to other players too. I've been with Galatasaray both while he was coaching and while he was away. You can see the difference," he said.